When college students travel during the winter semester break, it’s rare that they do so to harvest potatoes, pick carrots and feed the homeless – unless said college students attend Niagara University.

Thirty-seven students from the Lewiston-based, Catholic and Vincentian university volunteered during January to assist the less fortunate in underserved sections of Camden, N.J., Philadelphia, Pa., and the Republic of Panama. The pilgrimages are part of the university’s Brothers and Sisters in Christ program, or B.A.S.I.C. as it’s referred to on campus, and offered through Niagara’s Office of Campus Ministry.

Among the 19 students and two chaperones that ministered for 11 days in Camden was Jacey Diez, a senior from Lewiston majoring in TESOL and elementary education. This service trip marked Diez’s sixth with Campus Ministry – and her second to New Jersey. She also previously participated in B.A.S.I.C. missions in Buffalo, Philadelphia, Panama and Greensboro, N.C.

“I decided to return to Camden this year because I was truly touched and inspired by the caring individuals we met last year who made a difference in the poverty-stricken community,” Diez said. “As a future ESL teacher, it is my goal to contribute to the development of school classrooms that strongly value diversity and multiculturalism, and provide equal opportunities to learn for all students. The diverse population of Camden’s city schools and high population of English language learners (43.9 percent of students, as of 2015) also contributed to my interest in returning, since teaching English to speakers of other languages is my future career path.”

Along with assisting in schools, the NU students in Camden worked at a soup kitchen, met with local youth groups, attended bilingual Mass, volunteered at a homeless shelter, spent time with impoverished children and elderly in the community, and participated in community clean-up projects in parks and alleys. 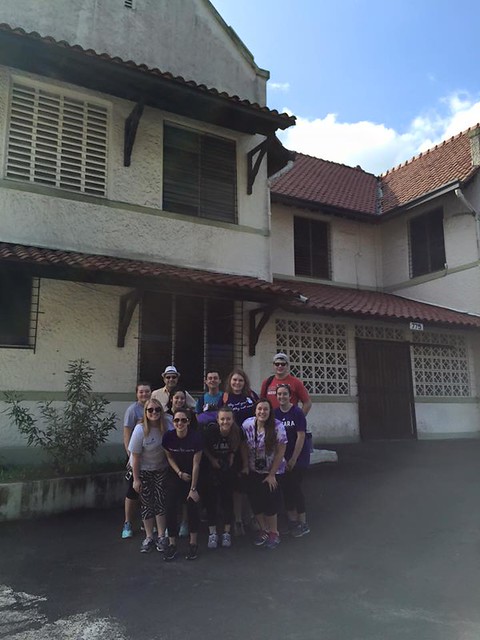 Meanwhile, in the Germantown section of Philadelphia, senior biology major Jeffrey Gansworth was one of eight students (and two chaperones) that performed work at centers that offered free food to diseased residents, shelters for the homeless, and after-school programs in the city. Gansworth, a Vincentian Scholar at Niagara University, said the experience further changed his perceptions of poverty and gave him a deeper understanding of what he can now do to help out in his own community.

“What stood out to me was not only how welcoming the people of Philadelphia were, but how thankful the people were that we had traveled from so far to serve. Even the children in the after-school programs were ecstatic to see us every day,” noted the Niagara Falls resident. “The experience showed me that what Niagara is doing makes a difference. Every action, no matter how seemingly big or small, has a powerful effect.”

Much further south, 10 Niagara students were joined by two university employees as they traveled to several locations in Panama. In what each participant called an “eye-opening experience,” the group spent time in the Nueva Vida nursing home and Hogar Malambo orphanage in Balboa – and that was just the first day. They were then introduced to Soloy’s indigenous community and culture, before moving on to Volcan, Cerro Punta and, finally, Panama City to tour the canal and other sites.

Sophomore Jakob Rickettson, of Holland, N.Y., said the trip taught him that it’s better to be humble and serve than to try to accrue material possessions in hopes of “becoming somebody.” The finance major spent much of his time helping a family pick crops in Guadalupe.

“God is their hope, salvation and life. It was a privilege and eye-opening experience to witness these people. I went there to serve them, but, in a way, they inspired and served me,” Rickettson said.

“There are good people in this world who work hard but don’t make much money. I think it’s far too often perceived that people in poverty don’t work at all. They work their tails off and it just doesn’t work out for them. You can serve in more ways than donating money. Even just a smile or a conversation in broken Spanish can become a light and the greatest memory for these people.”

Rachel Bailey, a Spanish and liberal arts major from Grand Island, traveled to Panama just 15 days after returning home from Nicaragua, where she helped build a home for an impoverished family in El Sauce.

“Meeting the people and hearing their stories is something I will carry with me for the rest of my life,” she said. “Both trips reminded me not to take the little things for granted, such as readily available hot water. The people in both countries have inspired me to be thankful for everything I have and to love people wholeheartedly. I truly believe that everyone I meet has something to teach me. I just need to be open to receiving and learning.”

At each of the B.A.S.I.C. service locations, an emphasis was placed on prayer, community-building, fellowship and spiritual reflection, which was held every night.

“B.A.S.I.C. helped me to realize what my prayer life could be,” said psychology major Kelly Zaky, who was stationed in Camden. “Being surrounded by a community so involved in their faith showed me where my spirituality was lacking and how I can learn from the people of Camden to improve it.”

“Going on the B.A.S.I.C. trip was the best decision I made since coming to NU,” reflected Anna Cappello, an Academic Exploration Program student, after her time in Philadelphia. “Not only did I meet my closest friends, but I feel more spiritually devoted to God as an individual and as part of a community.”

The time the students spent together developing spiritually and encountering Jesus in the faces of the poor brought them closer to one another. While the experience unequivocally affected their spiritual identities, the opportunities to engage in fellowship also forged very strong bonds within the group.

“Throughout my time as an undergraduate student, I have discovered that the Brothers and Sisters in Christ Program is a service experience that is unlike any other,” Diez said. “Through service immersion and living in community, I have learned that you become friends with people you might have never have met. Working with people in a new place quickly turns a group of strangers into close friends. These friendships last, even after the trip is over.”

Gansworth agreed, saying, “The group of people that came with me to Philly became a second family to me. We played games every night together, dined together, lived together, worked together, and laughed together. It is one of my biggest regrets that I had not gone on a B.A.S.I.C. trip sooner. As a senior about to graduate, I will miss – and do miss – the family we formed in Philadelphia.”

Coming up in March, 12 students will head to Macon, Ga., relinquishing the traditional rest and relaxation of spring break to lend a helping hand with Kristina Daloia, Niagara’s director of campus ministry, and her husband, Mike Daloia, an NU alumnus who serves as assistant director of the Heart, Love and Soul food pantry in Niagara Falls.

“The group that served there last year loved the experience, so we are excited to return,” noted Kristina Daloia.

When individuals volunteer to participate in a B.A.S.I.C. immersion trip, they are choosing to fulfill the mission of St. Vincent de Paul, the Vincentian mission promulgated at Niagara University.

The Rev. Kevin G. Creagh, C.M., vice president for university mission and ministry, said that the students’ understanding of his confreres’ “ministry of presence” is a critical component of these week-long trips of service and spirituality.

“In many of these areas that we send students to, they are working with people who are impoverished, but also living predominantly in isolation,” explained Father Creagh. “These are people in desperate need of human and financial resources, but they are also yearning for personal attention and the love of others.

“We have a moral and spiritual responsibility to meet these needs, for that is what St. Vincent asked us to do.”

B.A.S.I.C. is but one component of Niagara University’s nationally recognized service learning program. With students contributing more than 1,000 hours of community service each week, NU has been tabbed a “Top College” in the area of service learning by U.S. News and World Report and named to the President’s Higher Education Community Service Honor Roll every year since its inception in 2006.

The Niagara University employees who accompanied students this year included: