Acclaimed author Yaa Gyasi was the featured presenter for the first-ever installment of the Peggy and John Day University Honors Lecture Series at Niagara University, which was held Oct. 12 at the Castellani Art Museum.

A capacity crowd of nearly 200 attended the presentation. Attendees included high school and college students, as well as literature enthusiasts from throughout Western New York.

Gyasi’s talk was enthusiastically received and wide-ranging. The Homegoing author touched expertly on issues such as the writing process, how important writing is to the learning process, and how her writing has given her an insight into questions she’s had about race relations and the history of slavery and oppression in America and Ghana.

“Ms. Gyasi’s insistence on how hard she works to write and how her writing is rooted in her own past experiences served as great advice to those in attendance,” said Dr. Michael Barnwell, associate professor of philosophy and director of Niagara University’s Honors program, which sponsored the event. “Furthermore, the structure of her novel (which ranges from 1700s Ghana to modern-day America) demonstrates the rootedness of all of our experiences and how to understand anything, one must endeavor to try to understand everything.”

Gyasi encouraged the young writers in the audience to become voracious readers. Reading as much as possible is critical to developing exceptional writing skills, she said. 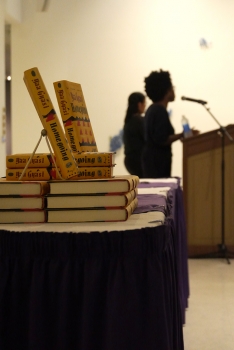 Homegoing follows the lineage of two half-sisters born in different villages in Ghana and their descendants through eight generations. It details the troubling history of slavery on both sides of the Atlantic and the lasting impacts it had on those who were taken and those who were not.

The book won the National Book Critics Circle’s John Leonard First Book Prize and NPR’s Debut Novel of the Year. It was also one of Oprah Winfrey’s 10 favorite books of 2016 and a New York Times 2016 Notable Book.

Born in Ghana and raised in Huntsville, Alabama, Gyasi holds a B.A. in English from Stanford University and an M.F.A. from the Iowa Writers’ Workshop. In 2016, she received the National Book Foundation’s “5 Under 35” Award.

The Peggy and John Day University Honors Lecture Series was established through a gift from Margaret Ranft, ’77, and John Day.