The processional for Niagara University’s annual New Student Convocation typically conjures mixed emotions. Freshmen and transfers are anxious to commence a new and exciting chapter in their lives while family members and friends realize that the 60-minute ceremony is all that separates them from exchanging hugs and “see you laters” with their loved ones.

However, after hearing current NU students, faculty members and administrators speak, attendees are inevitably washed with a sense of calmness. Monteagle Ridge is now the second home for these more than 800 young men and women from numerous states and countries. 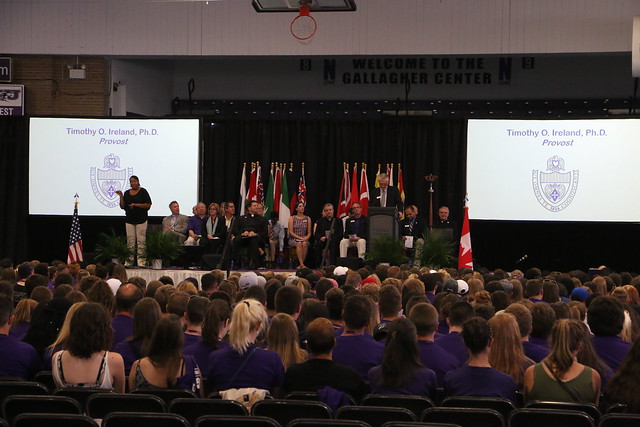 How does that happen in a single hour?

It begins with associate professor Christopher P. Aquino articulating how NU has had such a profound impact on his life over the last four decades. Aquino, now an associate professor of accounting, earned his undergraduate degree from Niagara in 1985 and then returned to complete his MBA studies in 1994.

Aquino’s decorated career included positions as an auditor, controller and even C.F.O. of a hedge fund. Upon his retirement in 2007, Aquino attended the AACSB Bridge program at Niagara, which fueled his desire to begin a second career in education and allowed him to follow his dream of teaching at his alma mater.

Aquino did just that, starting as an assistant professor in 2009 – and his students and colleagues are sure glad he did. Last year, he was chosen by his peers as the recipient of NU’s 2015 Excellence in Teaching Award, which gave him the podium during today’s convocation.

“Niagara University hires some of the best faculty in their disciplines and provides them with the opportunity to engage in top-notch research, often with their students,” Aquino said Saturday. “It is not surprising to see faculty and students engaging all across campus. As a Niagara alumnus, I can still remember the names and faces of most of my professors. This does not happen in many places in higher education.”

That high level of collaboration really does exist, according to Rachel Bailey, a senior Spanish major who has been heavily involved with the university’s Office of Campus Ministry.

“I chose to attend Niagara because I wanted to be a name instead of a number,” Bailey said. “The partnerships that you will make during your time at Niagara will last a lifetime. I would be willing to guess that you might not even notice them forming, but one day you will realize that you have a support system forever in the staff and faculty here.”

Khallid Lewis, a Brooklyn native, admitted that when he was sitting in the audience as a freshman for his New Student Convocation, he never would have foreseen that he’d be speaking at the event three years later as the student body president.

“We moved in and had the convocation on my 18th birthday,” Lewis told the Gallagher Center assemblage. “I remember sitting in the sweltering heat wondering the same thing every new student is wondering right now: What will my time in college hold for me?”

Fast forward to fall 2016 and Lewis has added a second major (hospitality and tourism management and mathematics), joined the NU Honors program, and become an NUB peer mentor, a community advisor and athlete. Last spring, he was elected president of Niagara University’s student body.

Speaking of presidents, the Rev. James J. Maher, C.M., the 26th Vincentian to hold the title of president at Niagara University, told the students that Niagara is right place for them to flourish, academically and socially.

“Success leaves clues,” said Father Maher. “You’ve heard from students and learned how they’ve connected their passion and their life energy to their studies, to their activities and to their human relationships and the community here. They are people of service who live lives of deep purpose, of meaning, and seeking wherever they are to create lasting impact in the lives of others.

“We seek to accompany you on the journey of life and lead you on your quest for deeper purpose and meaning.”

The New Student Convocation, a Niagara tradition, is considered a bookend to commencement, and an opportunity for new students to develop a true connection to the university. It also provides a chance for parents to share in an important transition in the lives of their sons or daughters.

The final student speaker of the afternoon was Andrew Hayes, the only junior to offer a welcome during this year’s convocation. He informed the new students of his confidence that they would find the Niagara University community as collaborative and supportive as he has.

“Here at NU, we are one; we are one body, one family,” remarked Hayes, a theatre designstudent. “At this school, I promise you that you will never be alone. We all serve and help each other out in so many ways. You guys are one class, you stick together.

“You will meet some pretty amazing people here and will build friendships that will last forever. You see those people on the left side of me in the bleachers?” asked Hayes as he pointed to the orientation leaders, “They are my family.”