The College of Business Administration recently celebrated the accomplishments of Dr. Tenpao Lee, professor of economics during the College’s end of year dinner in May.  Lee recently retired after serving Niagara for 34 years.

Let’s start with a little background on the man, the myth, the legend, Tenpao Lee or Eddie as some of his friends may call him. He arrived to Niagara University in 1987 as an associate professor after teaching a few years at Southern University in New Orleans and completing his Ph.D. in Economics from Iowa State University. By 1993, he had achieved the title of professor, an indication of his tremendous research and commitment to Niagara.

A little history lesson on what life was like in 1987. There was no email, only basic computers, no internet, and no cell phones. Lee was hired to teach transportation management, as part of the Transportation, Travel & Tourism (TTT) program that recently had transferred to the College of Business and became the new supply chain program.

A few highlights of his career at Niagara, it is quite hard to limit this just to a few as he certainly accomplished a great deal. He served as the Director of AACSB Continuous Improvement committee for the college from 1994 until the College of Business received its accreditation with the Association to Advance Collegiate Schools of Business in 2000. He was involved in both re-accreditations that followed in 2010 & 2015. He served as interim dean twice in 2011-2012 and 2016-2018. During his 2nd term as interim dean, he points out that there was a record high enrollment in the MBA program, which he cites is due to enhancing the efficiency of the internal operations and shortening the cycle of the applications.

Service to the University is a key aspect of Lee’s time at Niagara. He developed study abroad programs in China, Japan and Taiwan and organized and led several study abroad groups over the years from 2005-2013. He was instrumental in creating partnerships in Shanghai and Wuhan for international students. He encouraged professors from those schools to come to Niagara as J1 scholars. Also in 2013, Lee was involved in “Niagara University’s American Business Education Program” providing business training in the areas of U.S. international business relations, U.S. capitalist market, U.S. manufacturing, campus culture of U.S. universities, and teaching management for 23 Chinese delegates from Jianghan University, Wuhan, China. 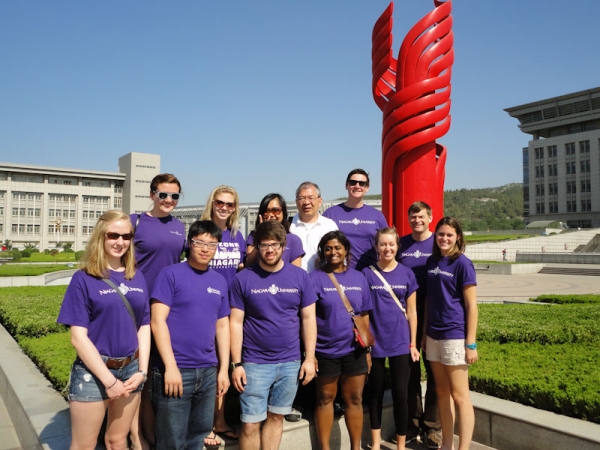 In January of 2020, he was part of a team from Niagara led by Rev. James J. Maher, C.M. president of Niagara University, Debbie Curtis, V.P. of International Relations. Chandra Foote, Dean of the College of Education and Father Creagh, V.P. University Mission & Ministry who signed an agreement with Hunan First Normal University, which provides a joint 3 + 1 study abroad program, officially approved by the Beijing government, as part of the College of Education.

Lee also was actively involved in the Fulbright Program, the flagship international educational exchange program sponsored by the U.S. government. It is designed to increase mutual understanding between the people of the United States and the people of other countries. Lee served as the Fulbright Scholar to Taiwan 2000-2001, a senior specialist 2005-2009, and a Fulbright scholar to Malawi July/August 2009 and served as Chapter President WNYNWPA 2010/11 & 2011/12.

A review of Lee’s extensive cv shows the quantity and quality of his research over his career in education. With over 80 research papers published from 1984-2018, numerous TV and news interviews, and research presentations galore, he has certainly been an active researcher. He enjoys staying up to date on transportation and economics trends and issues with topics including applied economics, supply chain management, global economy and data mining. In the last few years, Lee has been interviewed many times from several social media channels and more than 90 times by Fortune Magazine, USA Today and Yahoo Finance.   He explained the importance of providing information, “you need to be able to explain things in an understandable way but also be able to justify your explanations”.

A few other key items that should be noted, Lee co-developed a web-based Buffalo NAPM index in 2005, which remains a vital tracking index for the WNY economy. He received several teaching awards during his career, including the Hunan Distinguished Overseas Professor, Hunan University in 2016, and Shanghai Distinguished Overseas Professor, from the Shanghai City Government also in 2016. He received the College of Business Service award in 2016 and researcher of the year award in 2002. He also received several university research and summer grants over the years.

Rounding out the trifecta of an excellent faculty member, Lee has taught several technical oriented courses like data analytics, data management, advanced business analytics. He explains that he finds it useful to use more realistic data for learning and shared that students have found it useful in their careers in data management.

Dr. Ann Rensel, Associate Dean and colleague who offered remarks regarding Lee spoke about his teaching method, “Tenpao has an innate ability to push people, who are his students, in a way that they do not realize, he draws them to be better, to do more, and to find their own way.  He has been a great scholar, colleague, and mentor to many.”

Lee summed up his years teaching at Niagara, “A life cycle is continuous learning. When I first started teaching, I used chalk and a projector. As a professor, you need to continue to learn new things and update your lecture so your students can benefit from your knowledge.” When asked about tips for investing, “investors need to invest in new industries, beyond the imagination, there are no limits for the development of technology.”

In the last 5 years, Lee has been a part of Reverend James J.  Maher, C.M. presidents initiatives involving increasing Niagara’s international presence and to create a more diverse campus. As part of this, Father Maher established the International Relations office and Lee accompanied him several times to Asia for student recruitment. Even after his retirement, Lee will continue as a consultant for international relations and plans to travel internationally at least twice a year.

Lee just added another important title to his career, the distinguished honorary title of Professor Emeritus was bestowed on him May 2021. The title is awarded to retired Professors who have made an exceptional contribution in academic leadership terms, including dedicated achievement to his or her field of study.

The College of Business wishes Dr. Lee well in his future endeavors and will miss his distinctive laugh, sense of humor and calm and steady character.  He plans to spend time enjoying his favorite pastime playing bridge (a champion bridge player), monitoring the stock market, and spending time with his family, his wife Christin, and sons Phillip and Theodore (Assistant Director, International Recruitment & Operations at Niagara).  Lee plans to continue to help people in whatever way he can. The Niagara spirit is truly alive and well, represented through his lifelong learning, and service to others and Niagara University. 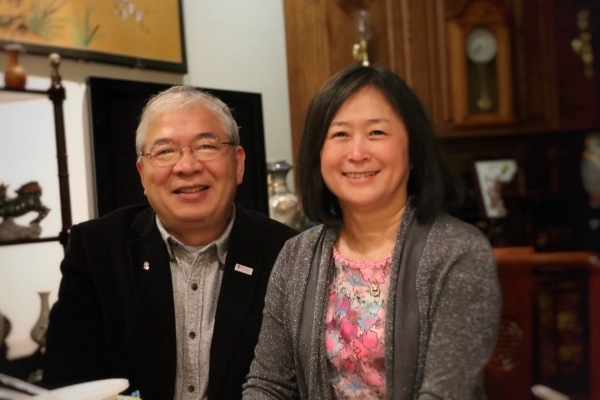