On a beautiful late-summer Saturday in September, 68 girls between the ages of 9 and 12 from 13 schools across Western New York, together with more than 100 women athletes, tried their hand at a variety of sports during Western New York Girls in Sports Day, hosted by Niagara University and offered for the first time in Niagara County. 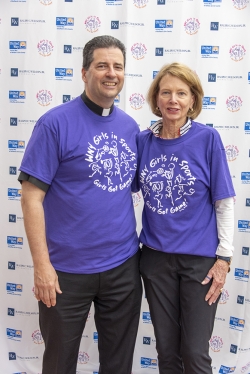 The event on Sept. 21 started with a demonstration of the exercise fitness program Zumba as the young girls were welcomed by student athletes from Niagara University and Niagara County Community College, received their T-shirts, and were assigned to their teams. Remarks by the Rev. James J. Maher, Niagara University president; Mary Wilson, Ralph C. Wilson Jr. Foundation (pictured at right with Fr. Maher); Simon Gray, NU director of athletics; and Jada Pierce, NU women’s basketball head coach, followed. The teams then made their way to numerous stations in and around the university’s Kiernan Recreation Center to learn more about sports, including volleyball, Danceline, yoga, cross country, softball, and basketball, from coaches and the female athletes. The day ended with lunch and closing remarks from Wilson, Daycia Clarke of the United Way of Buffalo & Erie County’s WNY Girls in Sports program, and Father Maher.

“Niagara University is proud to host the first Girls in Sports Day held in Niagara County,” said Father Maher. “We are grateful to Mary Wilson and the Wilson Foundation for their commitment and generosity to promote leadership, teamwork, and create awareness in sports opportunities for young women.” 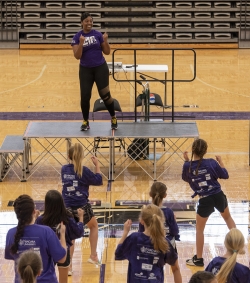 Western New York Girls in Sports was founded by Mary Wilson, wife of Buffalo Bills owner Ralph Wilson Jr., in 2006, with the goal of enriching young girls’ lives through involvement in sports. Wilson’s personal passion for sports was the impetus for creating WNY GIS and developing its focus on teaching young girls and women the life lessons that sports offer.

Learn more about Girls in Sports at www.wnygirlsinsports.com.