For the sixth year, the NU campus community and local agencies came together to display and view artwork reflecting the journeys, experiences, hopes, and dreams of the survivors of domestic violence who created them. “Living in Light: The Art of Healing,” was held on Oct. 5 at Niagara University’s Castellani Art Museum in observance of Domestic Violence Awareness Month and tied to the Red Flag Campaign, a national public awareness initiative designed to encourage college students to intervene when they see a warning sign (“red flag”) of partner violence.

“Healing is a process, and it can look different for everyone,” said Emily Pike, director of NU’s Office of Violence Prevention and Education. “But what we all share in common is being here, in this moment, living in the light. The light of hope. The light of progress. The light of healing, the light of compassion, and the light of new beginnings. That is why we called this event ‘Living in Light: The Art of Healing.’”

The university partnered with several community agencies in organizing the event, including Pinnacle Community Services and the YWCA of the Niagara Frontier, which provided artwork created by the adult and child survivors of domestic violence participating in their programs.

“The art you see around the room shows a glimpse of a survivor’s healing journey, a light in the darkness,” said Caleigh Skinner, director of Domestic Violence Services at Pinnacle Community Services. 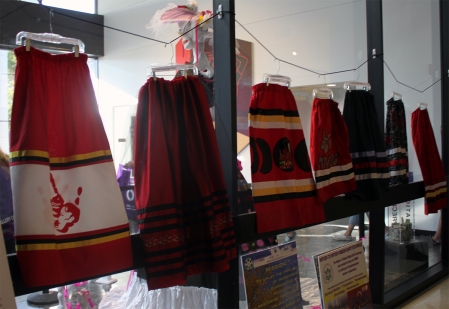 The “Nation to Nation Ribbon Skirt Exchange,” featured ribbon skirts created by members of the six nations of the Haudenosaunee Confederacy in 2021 as a way of showing unity and sisterhood for missing and murdered Indigenous women.

New this year was the “Nation to Nation Ribbon Skirt Exchange,” an exhibit of ribbon skirts created by members of the six nations of the Haudenosaunee Confederacy. The exhibit, provided by the Seven Dancers Coalition, was created in 2021 as a way of showing unity and sisterhood for missing and murdered Indigenous women.

In addition to the artwork, the event featured the “Silent Witness Project,” a reconstruction of a national traveling memorial honoring individuals who were killed in acts of domestic violence. This year, the exhibit featured 24 black silhouettes, two more than in previous years, to represent the number of victims as of 2022. Each silhouette had the name and date of death of a Niagara County domestic violence victim. “The Clothesline Project,” a collection of T-shirts with messages to raise awareness of domestic and sexual violence, was displayed outside the museum.

“Tonight reminds us that when we come together, and when we live in the light, we have incredible power,” said the Rev. James J. Maher, C.M., Niagara University president. “We have to manifest that power, we have to share that power, we have to bring that light to all circumstances in life where people are taken advantage of, where there’s violence, and where there’s a need for that light. So continue to be that light as you go forth this evening.”

In addition to Pinnacle, the YWCA, and the Seven Dancers Coalition, co-hosts of the event included the Niagara County Sheriff’s Office – Victim Assistance Unit & Domestic Violence Intervention Program, the Niagara Falls Police Department – Domestic Violence Unit, and Niagara University’s Castellani Art Museum, which provided the setting for the exhibits to be displayed.