Amid the conical hats, demands for hot tea and general hullabaloo of New Year’s Eve was a gripping mini-documentary about a new program that launched last fall at a high school in Boca Raton, Fla.

Produced by MassMutual, the three-minute piece spotlighted We Dine Together, a lunch club started by four teenagers that endeavors to combat social isolation. Its premise is that no student at Boca Raton Community High School unwillingly eats alone. Each day, club members walk around their school’s courtyard introducing themselves to classmates spotted eating alone during lunchtime.

The students are invited to eat pizza, share poetry, talk politics, play games and plan community service initiatives. Most importantly, these students feel a sense of belongingness, which psychologists say is so critical to human development, especially for teens.

“After satisfying our physiological needs and safety needs, (Abraham) Maslow felt that our belongingness needs were critical,” noted Dr. Tim Osberg, professor of psychology at Niagara University. “It is clear that those needs can easily go unmet and even attacked in this day and age of social media. Most modern-day psychological motivation theorists agree with Maslow and put heavy emphasis on meeting our belongingness needs as being at the root of most of what we do.

“There have even been several studies that suggest that social ostracism can hurt worse than physical pain.”

We Dine Together was founded by students Denis Estimon, Allie Sealy, Jean-Max Meradieu and Kinsley Florestal. Its advisor, English teacher Jordan Hernandez, is a two-time Niagara University graduate. Hernandez said that his Christian upbringing, coupled with his experiences at one of the country’s three Catholic and Vincentian universities, has helped him to encourage his students to “love their enemies into conviction” and “not drink from the cup of bitterness.”

The son of a carpenter, Hernandez said his father, Rick, taught him from a very young age the biblical truths of acceptance, love and compassion. Rick Hernandez often took in people who were homeless, addicted and otherwise cast out from society.

“At Niagara University, I continued to learn to serve those in need, the less fortunate,” explained Jordan Hernandez, who earned a bachelor’s degree in English education and a master’s degree in special education. “I learned at Niagara that being a man isn’t about being strong and without emotion. Dr. (Raphael) Heaggans taught me that Jesus was a man that was always weeping. Know why? He was perfect. When you are not absorbed in yourself, you can feel the sadness of the world. This club is about helping one another carry his/her burden each day. I have been so blessed by this.” 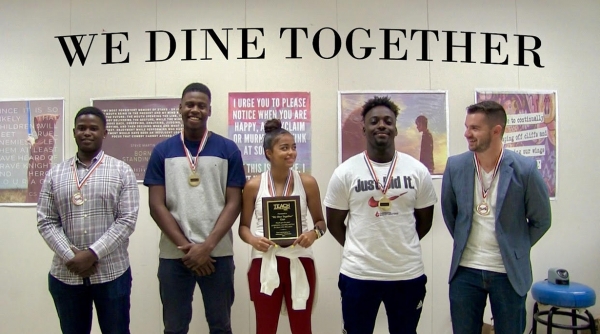 Jordan Hernandez, '12, M.S.Ed.'18, far right, is pictured with student-leaders of the We Dine Together club at Boca Raton Community High School.

Almost 3,400 students attend Boca Raton Community High School. Most of them are Caucasian and come from financially stable families, although approximately 70 countries are represented on the school’s campus.

Estimon, born in Haiti, told MassMutual that the idea for the club was born when he was talking with Hernandez about the social injustice he observed in the cafeteria.

“At Boca High, if you look at the cafeteria from a bird’s eye view, on one side you’ll see more isolated kids, and on the other side you’ll see the football players,” Estimon said. “I told him it shouldn’t be this way. He challenged me to do something about it and that’s basically what I did.”

More than 60 students have joined We Dine Together since the beginning of the school year. The meetings take place on Tuesdays in Hernandez’s classroom, with leaders scouring the campus during the rest of the week to find students who are forgotten, alone, needing and/or new and unsure.

Some of the students are searching for ways to combat the hatred they see around them. Others, having carried pain that was never validated, choose bitterness. Hernandez talks a lot about key historical figures who altered the trajectory of their lives by combatting hatred with love, namely Dr. Martin Luther King Jr. and Nelson Mandela.

Participants never have to pay for their lunches when they attend club meetings, thanks to support from local organizations, such as the Rotary Club of Boca Raton, PROPEL (People Reaching Out to Provide Education and Leadership), and Boca’s Promise, a mental health organization.

MassMutual and CNN filmed a mini-documentary and commercial at Boca High in November for their New Year’s “Live Mutual” project, which highlights people trying to do good in the world by extending a hand to their neighbors.

The commercial aired at 11:35 p.m. on Dec. 31 during CNN’s New Year’s Eve Live. Afterward, Hernandez, his wife, Samantha, and two student-leaders participated in a live broadcast from Lincoln Center in New York City, during which the group was treated to a surprise performance by 16-year-old Broadway actress Frenie Acoba and the National Children's Chorus.

Prior to CNN, the club was featured in articles by The Huffington Post and the Independent (United Kingdom). They have also fielded calls from People magazine, Fox & Friends, The Steve Harvey Show and Ellen.

Several other schools have now shown interest in starting We Dine Together clubs. Thus, the students at Boca High are hoping to hold a National High School Dining Day this May.

“What’s most important is the mission and that’s about finding those who need to be found,” Hernandez said. “These ideals are deeply grounded in my faith and the leaders of this club’s faith, the same ideals that Niagara University believes in. We Dine Together uses biblical truth –  Vincentian truths – to unite people from beyond our borders. We use these truths to love our enemies and those who have hurt us.”

Dr. Osberg, upon hearing of We Dine Together, also noted the program’s Vincentian parallel.

“St. Vincent fed those who did not have enough to eat,” said the Vincentian Mission Institute graduate. “This program nourishes the spirit of those who do not have enough acceptance and affection, and reinforces the power of togetherness.”

To learn more about We Dine Together, please visit www.wedinetogether.org.

Additional information on Niagara University’s College of Education is available at www.niagara.edu/education.