Nearly 200 individuals – from Niagara University and the greater Buffalo-Niagara community – participated in Changing Our Minds: A Mental Health Summit, which was held Saturday in the Castellani Art Museum.

Tasked with fighting stigma, apprising people about the signs of mental illness and teaching methods to support someone into the helping system, the conference discussions were informative, compelling and lively.

Dr. Tim Osberg, professor of psychology at NU, set the stage for the conference with his presentation, “The State of Mental Health in America.”

Niagara University theatre students and psychology majors from Active Minds, directed by Doug Zschiegner, performed a series of engaging role plays that highlighted the need to respond differently to the subtle signs of psychological disorders, with Dr. Sharon Watkinson as narrator.

The conference’s keynote address was given by Eric Weaver, a dynamic speaker who served as a police sergeant in Rochester and founded Overcoming the Darkness. His presentation focused on his own struggles with mental illness and provided advice on how individuals can combat stigma. 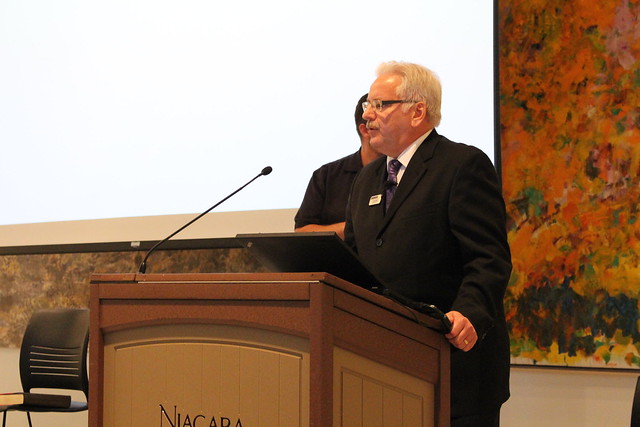 After a break during which participants attended a resource fair with key local mental health agencies, Dr. Osberg then reviewed some of the signs and symptoms of mental illness. He also presented a set of strategieshe recently developed for effectively supporting someone into the mental health system.

Additional remarks were given by:

The conference was the opening event of the 2013-2015 Vincentian Mission Institute cohort’s capstone project designed to augment Niagara’s strategy to address the growing mental health needs of students and the surrounding community. Members of the cohort include Drs. Debra Colley, executive vice president; Tim Downs, provost; Tim Ireland, dean of the College of Arts and Sciences; and Craig Rivera, associate professor of criminology and criminal justice; and the Rev. Kevin G. Creagh, C.M., vice president for university mission and ministry.

St. Vincent de Paul is recognized as a leader among the clergy in the 17thcentury movement toward the more humane treatment of the mentally ill.