On July 27, 2022, St. Jude Parish in Boca Raton, Fla., celebrated the feast day of St. Titus Brandsma, a Carmelite priest who had been canonized just a few months earlier. One of the parishioners attending the Mass was Dr. Anthony N. Dardano, '63, who played a key role in the canonization of Saint Titus.

Dr. Dardano, a retired obstetrician-gynecologist originally from Utica, N.Y., was the lead medical investigator for the Vatican. He provided the medical testimony validating that Father Michael Driscoll, 0. Carm, former pastor of St. Jude Parish, was miraculously cured of metastatic malignant melanoma through the intercession of Blessed Father Titus Brandsma, the final step necessary to declare Father Brandsma a saint.

Father Driscoll had been diagnosed with advanced metastatic melanoma in 2004, which had spread from his scalp to his neck. There was no effective chemotherapy at the time, and doctors at Massachusetts General Hospital, where he was being treated, gave him a life expectancy, at best, of three years.

Father Driscoll was inspired by the heroic life of the fellow Carmelite, who was beatified in 1985, and decided that he would pray for Father Brandsma’s intercession for a cure.

Father Brandsma was a priest, educator, and journalist who was martyred at the Dachau concentration camp because of his public opposition against the anti-Jewish laws the Nazis were passing in Germany before World War II. Although he had been given an opportunity to retract what he had written, Father Brandsma refused. He died by lethal injection on July 26, 1942. The nurse who administered the lethal injection, so moved by Father Brandsma's last words to her, converted to Catholicism and attended his beatification in Rome.

After receiving permission from the Most Reverend Gerald M. Barbarito, bishop of the Diocese of Palm Beach, Father Driscoll distributed prayer cards to his parishioners and those in neighboring parishes so that they could join him in praying for the intercession of Father Brandsma. Despite his prognosis, Father Driscoll passed the three-year mark, and 10 years later, all traces of the melanoma were gone.

The fact that his doctors had no medical explanation for his healing and recovery prompted Father Driscoll to pursue the promotion of the Carmelite friar's Cause to Sainthood. Along with Bishop Barbarito, Father Driscoll asked his good friend Dr. Dardano to participate in the investigation, a lengthy process that began in 2016.

Over the next several years, Dr. Dardano, along with Bishop Barbarito, his team, and the Very Reverend J. Mario Esposito, O. Carm., Carmelite provincial, led the painstaking theological and scientific investigations around Father Driscoll's healing, interviewing medical professionals, parishioners, and other priests. On Dec. 12, 2017, their supporting evidence, documents, and testimonies—1,232 pages—were hand-delivered to the Vatican in Rome. There, the Congress of Theological Consultors reviewed the documents and, based on the evidence presented, agreed that the healing was miraculous. The cause was then submitted to the cardinals and bishops of the Congregation for Causes of the Saints for final study. On Nov. 9, 2021, they approved the canonization cause and forwarded their ruling to Holy Father Pope Francis. 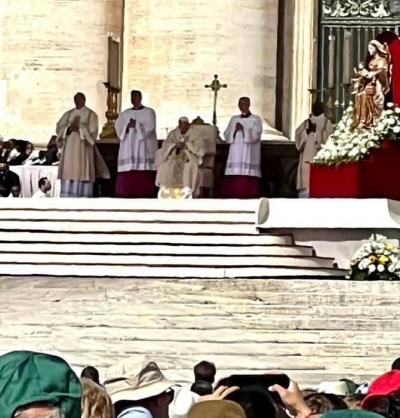 Pope Francis canonized Blessed Father Titus Brandsma at a Mass in St. Peter's Square in May 2022.

Six months later, on May 15, 2022, Father Titus Brandsma was canonized at a Mass in St. Peter's Square. Dr. Dardano, his wife, and his son, Dr. Anthony Dardano Jr., (a plastic surgeon who had operated on Father Driscoll attesting to the absence of any residual or recurring malignancy) attended the ceremony. Also present was Dr. Gregory Rudolph, the surgeon from Massachusetts General Hospital who did the original surgery on Father Driscoll in 2004, and his wife.

"It was impressive," Dr. Dardano said of the ceremony. He noted that there were about 150,000 people in the square to witness the canonization of Father Brandsma and nine other individuals. The night before, a solemn Mass at St. Paul Outside the Walls was celebrated by numerous Carmelite priests and bishops from the United States and Holland, Titus Brandsma's homeland. Dr. Dardano's testimony, as well as the numerous documents validating the cause for sainthood, were read and prepared for presentation to Pope Francis the next morning. "I feel honored and blessed to have participated in a process few will ever have the chance to do, let alone live to see it come to fruition," Dr. Dardano said. 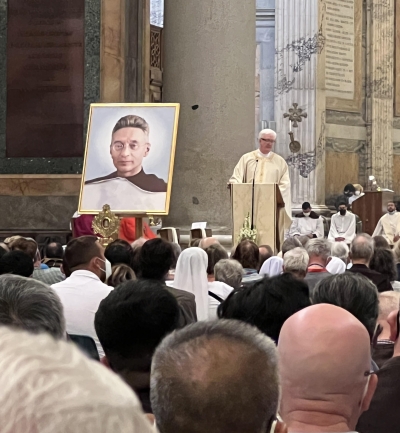 A Carmelite Mass was celebrated in honor of Father Titus Brandsma the night before he was canonized.

"I am humbled by the magnitude of my part in this process and the fact that my name and signature, along with Bishop Barbarito's, are now part of the Vatican archives on numerous signed documents,” he continued. “Even the rubber name stamp used below my signature is archived. I am truly blessed and privileged to have been an essential part of this. This experience will remain dear to me the rest of my life."

Over the course of his career, Dr. Dardano delivered some 5,000 babies and operated on thousands of women. At age 80, although he is no longer delivering babies, he is still active in his career. He is the medical director of the 536-bed Delray Medical Center in Delray Beach, Fla., and associate dean for academic affairs and professor of obstetrics and gynecology at the Charles E. Schmidt College of Medicine at Florida Atlantic University in Boca Raton, Fla.

Dr. Dardano received his doctor of medicine degree in 1968 from the University of Bologna, Italy, the first and oldest, still operating medical school in the world. During the Vietnam War, he served as commanding officer of the 330th Medical Detachment of the Active Army Reserve and was discharged with the rank of major.

A well-known medical ethicist, Dr. Dardano credits his Vincentian education with starting him on a lifelong dedication to advance and maintain ethical standards for the moral issues which face medicine today.

"It was my training at Niagara, because it was required of all those going to medical school to take a medical ethics course, that inspired me,” he said. “I still remember the name of the professor— Vincentian Father Elmer Kieffer, a man to whom I owe my lifelong dedication to the practice of sound Catholic medical ethics.”

Now, it is Dr. Dardano who is educating others on medical ethics. He teaches the seminarians at St. Vincent de Paul Regional Seminary in Boynton Beach, Fla., and is the vice president of the Palm Beach chapter of the Catholic Physicians Guild. He has served as the physician advisor on medical ethics for the Eternal Word Network, the largest religious media network in the world, and often speaks to medical professionals on the conflict between "our ever-changing culture and our never-changing ethics."

"Ethics is my hobby," he said. "We are constantly faced with new dilemmas in medicine that never existed before, such as freezing embryos, sperm or eggs; cloning; artificial insemination; brain vs. cardiac death; living organ donation; ordinary vs. extraordinary care; nutrition/hydration in the terminally ill; etc., all of which can raise serious ethical dilemmas. I am frequently asked by priests, fellow physicians, and patients what the best ethical answer would be in these cases.”

Interestingly, Dr. Dardano's medical expertise may lead to the beatification/canonization of another priest, Maryknoll Father Vincent Capodanno. Father Capodanno was declared a Servant of God on May 21, 2006, the first of the stages toward possible sainthood. Dr. Dardano is again leading the investigation with Bishop Barbarito to authenticate the alleged cure of a patient in the Palm Beach Diocese of multiple sclerosis.