David Campbell, ’63, and the Rev. W. Barry Moriarty, C.M., were the keynote speakers during Niagara Reaches Out to the World this past Wednesday, Sept. 23. Both men spoke extensively about the impact that they had in certain parts of the world that involved improving the conditions for the individuals where they volunteered their time.

Father Moriarty was ordained in Chicago in 1967 and is an active member of the Western Province of the Congregation of the Mission (Vincentians). He has worked in seminary formation as well as in Vincentian formation and in diocesan seminaries. He also helped found the DePaul Centre, which acts as the regional house and location for the Vincentian formation for the Region of Kenya, while spending 15 years in Africa. He served as a professor for 12 years at Tangaza College in Kenya as well as at Christ the King Major Seminary in Nyeri, Kenya. For the past four years, he has lived in residence at DePaul University.

Campbell has a 40-year business background that includes high-profile positions as president of BBN Technologies of Cambridge and GTE Labs in Waltham, as well as CEO responsibilities at Computer Task Group of Buffalo and Xpedior of Chicago. Campbell was also the founder of HandsOnThailand, which was one of the first groups to assist in relief efforts in the wake of the 2004 Thailand tsunami. The initiative raised several hundred thousand dollars to contribute to the rebuilding of five Phuket fishing villages. The organization, now called All Hands Volunteers, has executed more than 50 projects across the U.S. and overseas, including rebuilding efforts along the Gulf Coast for Hurricane Katrina, the 2010 earthquake in Haiti and the 2011 tsunami in Japan. Responses to Superstorm Sandy and Typhoon Haiyan are ongoing.

Both of these men showed extensive effort and motivation to helping those in need. Campbell and Father Moriarty have helped people in extremely different ways. One similarity that the two men share is the extent to which their presence in each community held. Whether the tragedy was caused by natural disasters, or the misfortune of the lack of resources in an area, Niagara University’s purple glowed brightly through their words and is visible in the communities afflicted by disaster but saved by effort.

The Niagara University Student Government Association presented a $1,520 check to Campbell’s organization from funds raised by students, faculty and staff prior to his visit. 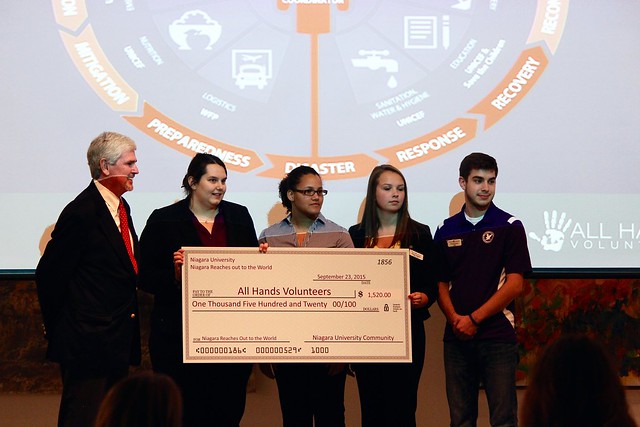 The university held several events on campus Sept. 23 to highlight the good work being done by students, faculty, staff and alumni around the world. In addition to the keynote presentations, activities included a panel discussion on sustainable development, service activities, a traditional Kamayan feast and table talks with representatives from various service organizations, and much more.