Niagara University is enhancing its commitment to prepare its students to be global citizens with the establishment of new educational partnerships and programs with several institutions in China and Vietnam.

The Rev. James J. Maher, C.M., Niagara University president, accompanied by Dr. Deborah T. Curtis, vice president for international relations, met with university presidents and senior leadership from the Tianjin University of Science and Technology, Tianjin Foreign Studies University, and Guangxi University of Chinese Medicine in early January to establish and enhance partnerships and develop exchange programs that will continue the university’s international outreach in Asia while meeting the needs of the specific institutions. 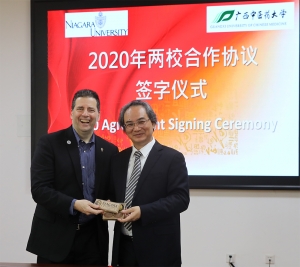 Creating a more international and diverse campus has been a priority of Father Maher’s presidency, and he has worked tirelessly to establish partnerships such as these to foster a campus environment that will prepare the students of today, and the future, to live and work in an increasingly global economy.

During the visit, Niagara signed agreements with Tianjin University of Science and Technology to establish a pathway for its MBA students to complete their degrees at Niagara, and with Tianjin Foreign Studies University for 2+2 undergraduate programs in hospitality and business, as well as MBA transfer opportunities.

In the province of Nanning, an articulation agreement was also signed with Guangxi University of Chinese Medicine to strengthen its existing undergraduate exchange programs and develop a new English as a Second Language program for academics pursuing their Ph.D. Approximately 34 Vietnamese students will study on the Niagara University campus this fall as part of these new programs. 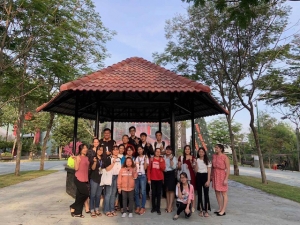 After leaving China, Father Maher and Dr. Curtis continued to Ho Chi Minh City, Vietnam, where they visited current students and alumni. Dr. Curtis also toured and met with seminarians and staff at Vinh Son Theological Institute to discuss the establishment of a summer English language program that will offer additional service opportunities for Niagara University students studying abroad, and met with Dr. Amanda Barbour, assistant director for English Language Development in Niagara University’s Brennan Center for Language, Culture and Leadership, and NU TESOL major Erin Taffe, who were teaching a short-term English program at Dong Nai Technical University. This training will become a model for a TEFL certificate program that prepares students to teach English abroad. In addition, discussions were held at Dong Nai Technology University to increase student participation in both exchange and summer academic programs. 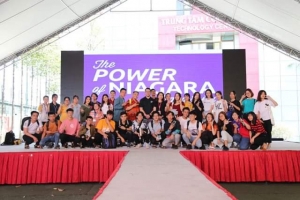 The next stop was in Hanoi, where Dr. Curtis and Ted Lee, assistant director for international recruitment and operations, met with officials at Foreign Trade University to launch new 2+2 programs that will enable FTU students to complete their undergraduate degrees in hospitality and business at Niagara University. Lee also gave presentations to students interested in transferring to NU’s MBA program.

A dinner with alumni and potential students was held at Le Tonkin restaurant, which is managed by Stephen Pham, a former student of Dr. Curtis. 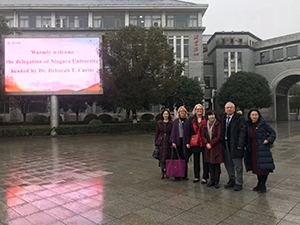 This trip comes on the heels of a trip to Shanghai, China, that Dr. Curtis and Dr. Chandra Foote, dean of Niagara University’s College of Education, took in December to establish several partnerships for new programs and summer exchange opportunities for faculty and students at Hunan First Normal University, the Shanghai Institute of Technology, the East China University of Political Science and Law, and the Shanghai Lixin University of Accounting and Finance.

At Hunan First Normal University, Dr. Tenpao Lee, professor of finance and economics, joined the NU administrators to review details and tour the facilities where an innovative program for early childhood will be launched. Niagara faculty will teach in that program during summer and winter breaks.

“Both trips far surpassed our expectations,” Dr. Curtis said. “The programs are a result of several years of developing and strengthening relationships with these well-respected universities. Having a more diverse campus, as well as opportunities for our students and faculty to explore new destinations, leads to a more globally engaged campus and a more peaceful world.”

In late January and early February, Niagara University will play host to 12 visiting professors from the East China University of Political Science and Law, who will work with faculty from Niagara’s College of Business Administration and its Office of International Relations to receive training and key strategies to improve their teaching, leadership, and research skills.