Members of the Niagara University community gathered to discuss the Russian invasion of Ukraine during a panel presentation on March 10, 2022. Four professors offered insight from different academic perspectives and answered questions following the presentation.

Panelists included Dr. Mustafa Gökçek, professor of history, who explained the historical background of Ukraine’s emergence as an independent country; Dr. Brian Bennett, professor of religious studies, who spoke about the influence religion, and specifically, Russian Orthodox Patriarch Kirill, leader of Russia’s dominant religious group, is having on the conflict in Ukraine; Dr. Dave Reilly, professor of political science, who argued that the political decisions made after World War II created the blueprint for this invasion; and Dr. Jim Kling, associate professor of business management, who discussed how the energy market is affected by the invasion and the impact on the U.S. as a result. 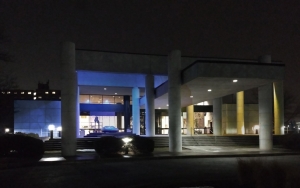 The Castellani Art Museum is illuminated in blue and yellow in solidarity with Ukraine.

Niagara also held a vigil for peace in support of Ukraine on March 5, and, in solidarity with the people of Ukraine, the Castellani Art Museum facade is being illuminated in the Ukrainian national colors of blue and yellow.