Niagara University has cut the ribbon on The Nest, a state-of-the-art sports lounge and new gaming area for the university’s growing Esports club. The Nest, located in O’Shea Hall, creates additional social and recreation spaces where students can watch sports and movies on large-screen TVs, attend student-run events, or even continue classroom conversations and collaborate on group projects. A special section of this new area will house the university’s Esports Club, giving its members a place to practice and play in league matches.

“We know that state-of-the-art learning facilities are only part of the equation when it comes to the student experience in higher education,” said Dr. Debra Colley, Niagara University executive vice president. “Creating social and recreational spaces that complement the university’s academic experience provides our students the opportunity to relax and socialize, away from the high pressure of today’s academic environment. The Nest provides a welcoming, comfortable, high-tech space for Niagara University that will significantly enhance our students’ extracurricular experience and aligns with our strategic plan to foster a culture that puts students first.” 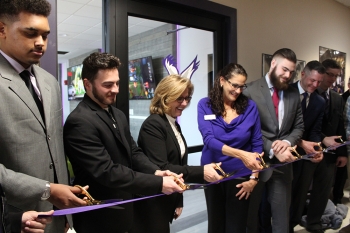 The new, 2,200-square-foot campus space features 70- and 86-inch smart TVs, to which students can attach video game consoles for social gaming, and separate seating areas that include booths and modular furniture to accommodate student gatherings. The Nest also includes an area that will be home to Niagara’s popular Esports club, where its members can compete in league play. That space includes 12 state-of-the-art desktop computers with powerful RTX 2060 graphics cards, 24-inch 1080p monitors, and custom set and controlled rainbow lighting, and three 50-inch TVs.

“The Nest is a critical example of an area students can unite to willingly face new challenges and find solutions,” said Bryce Molnar, president of NU’s Esports Club. “Esports is a great example of the immense impact that video games continue to have on society. This space allows students to meet and have localized practices with their teammates and peers who share a passion for video gaming, allowing them to congregate while having the opportunity to use top-of-the-line equipment to better themselves in various fields of collegiate electronic gaming.” 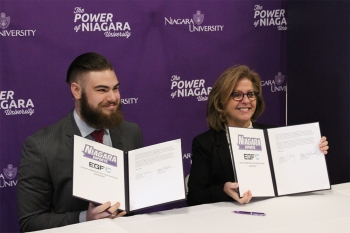 Since its launch in October 2018, membership in Niagara University’s Esports club has grown quickly. More than 40 students are now part of the group, which recently became a member of the Electronic Gaming Federation’s national intercollegiate Esports league. The team will compete in four titles—League of Legends, Rocket League, Overwatch, and Super Smash Bros. Ultimate—during its first EGF season, which begins this semester, and plans to travel to Atlantic City in March to participate in a tournament sponsored by the Metro Atlantic Athletic Conference and held in conjunction with the MAAC Men’s & Women’s Basketball Championships.

Not all of the Esports Club members are competitive gamers; the group also welcomes students who enjoy the social aspect of video gaming, says William Newton, assistant director of Campus Activities. “The club brings students who have the same interests together, where they can make new friends and have an enriching collegiate experience.”