While most college students are relaxing and enjoying the start of summer activities, four Niagara University business students competed at Manhattan College’s fourth annual Business Analytics Competition, which was held May 21-23 in New York City.

NU, led by Dr. Tenpao Lee, interim dean of the College of Business Administration, and business students Elizabeth Faxlanger, Erin Faxlanger, Khanh Tran and Phuong Tran, was one of 18 schools at the competition.

Dr. Ann Rensel, associate professor of management information systems, and Dr. Joseph Caruso, instructor of quantitative methods, approached business students at the start of the spring semester to recruit a team to represent Niagara. Dr. Caruso, who has 25-plus years of experience conducting analysis and research at IBM, provided technical work with the students in preparing the data set. 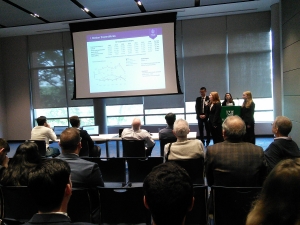 Data analytics is the process of examining data sets in order to draw conclusions about the information they contain, increasingly with the aid of specialized systems and software. Data analytics technologies and techniques are widely used in commercial industries to enable organizations to make more informed business decisions and by scientists and researchers to verify or disprove scientific models, theories and hypotheses. NU’s College of Business Administration is using these same concepts and ideas so that students will become business professionals who make solid ethical and data-driven business decision.

The two-phase competition at Manhattan College required students to analyze a specific dataset. Data and questions for the first phase were provided to the teams when they registered in February. Student teams analyzed the data to develop solutions, with the oversight of their faculty advisors. Then, in early May, each team prepared and submitted a poster summarizing their analysis and responses to the questions.

“After three months of analyzing New York City’s contract and spending data, I have a very different view of data analytics,” said Tran, a senior accounting major at NU. “Using our knowledge of economic relationships, we had to find the connection among the numbers, which seemed to be inanimate. However, with the more time and efforts we spent on them, the clearer they became.

“The data seemed to try to tell us a story as we mined and explored them. I had never spent so much time analyzing a database, so I was amazed at the first time I really saw a relationship lying behind the numbers. We became familiar with the data, and our works became smoother, easier and more interesting.”

The teams presented their posters on the second day of the competition. The poster session judging committee was composed of faculty advisors; however, advisors cannot judge their own team and the highest and lowest score is dropped for each team poster.

Late that afternoon, the teams were given the additional data and questions for phase two, which focused on Boston’s data set. The student teams worked on the new data set and met with their advisor. They had until 8 a.m. the following morning to analyze the data and submit their analysis.

In this semifinal round, all 18 teams were randomly assigned to two pools of nine, each simultaneously presenting to their respective panel of external judges. The top three teams from each pool qualified for the final round, in which the six teams presented their phase two findings again to all of the judges.

Niagara’s team was thrilled to learn that they had qualified for the final round.

“The judges and keynote speakers, who are professional data analysts and Wall Street veterans, gave us valuable feedback on our performance, insights on the industry and inspired us to become data storytellers,” explained Tran.

Niagara University was awarded second place in the poster competition and ranked within the top six teams (out of 18) for the overall competition. 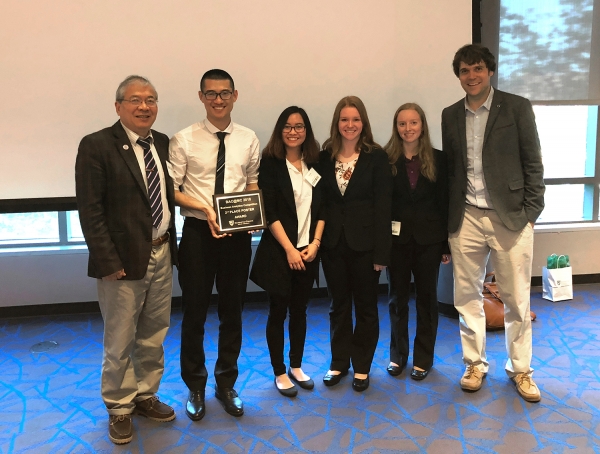 Dr. Lee attributes part of their success to their use of ANOVA (analysis of variance two factor) during their analysis.

“This is a great learning experience event in that it allows our undergraduate students to prepare and compete against other peer schools,” said Dr. Lee. “They gain a much better understanding of data analytics by participating. We are very proud of the outcome and look forward to sending a Niagara team next year.”

“I think the competition was a valuable experience and provided many learning opportunities,” added Faxlanger, a senior accounting and actuarial science major. “It was interesting to see the various ways other schools examined the data.”

Dr. Lee and the NU students expressed gratitude to Dr. Timothy Ireland, provost and vice president of academic affairs, for helping to provide support for the students to attend the competition and to expand their knowledge of analytics.