Niagara University's student chapter of the Club Management Association of America is the best in the nation, again.

The NU chapter defeated more than 40 other colleges and universities from across the U.S. to be named Student Chapter of the Year for the 11th straight year. This prestigious award was given during the association’s 93rd World Conference on Club Management and Club Business Expo, Feb. 7-12, 2020, in Grapevine, Texas.

The Student Chapter of the Year Award is based on a series of factors, including the number and variety of educational programs offered, member employment and internships in clubs, membership growth, its relationship with the state chapter of CMAA, and member attendance at events. The Niagara student chapter has won the award every year since 2008. 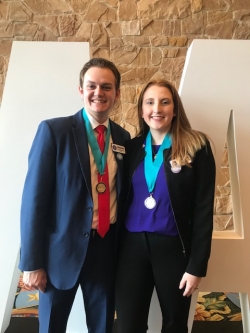 Seniors Zachary Farkas and Grace Dittman received coveted Joe Purdue scholarships in recognition of their commitment to the club industry.

Additionally, two Niagara students were recognized for their commitment to the club industry with the coveted Joe Purdue Scholarship. Student chapter president Zachary Farkas, a senior from Tonawanda, N.Y., and Grace Dittman, a senior from Groton, N.Y., were among the five students chosen for the scholarship, which assists with tuition costs.

Students who join Niagara's CMAA student chapter are required to complete a rigorous schedule of educational, networking, and professional development events, and work at a CMAA-affiliated club each summer between academic semesters.

“The continual recognition by CMAA proves Niagara University’s strength of programming, the commitment of its student members, and the widely recognized success of its alumni for the past 11 years in the profession of club management,” said Rachel Zilka, academic co-advisor of the chapter. “NU CMAA has set high standards, which is the ultimate reason that our students are ready to be placed at internships and post-grad positions.”

“We are excited to have the opportunity to work with such a talented group of young professionals, and are proud of their accomplishments,” added co-advisor Brandon Sears.

The Club Management Association of America is the largest professional association for managers of membership clubs. With nearly 6,700 members across all classifications, its manager members run more than 2,500 country, golf, city, athletic, faculty, yacht, town, and military clubs. The objectives of the association are to promote and advance friendly relations among persons connected with the management of clubs and other associations of similar character; to encourage the education and advancement of its members; and to assist club officers and members, through their managers, to secure the utmost in efficient and successful operations.