Hundreds of students attended an event held by Niagara University April 7 in conjunction with the Take Back the Night national movement, which aims to end sexual, relationship, and domestic violence in all forms.

I don’t think I’ve ever been prouder of my campus than I was last night. “Take Back My Life. Take Back The Night.” ♥ @NiagaraUniv #TBTN

Co-sponsored by the YWCA of the Niagara Frontier, the event took place on the Gallagher Center’s upper level, where students and faculty members were able to patronize resource tables set up by university departments and clubs, and local community agencies that work to end domestic violence.

Tonight was the single most beautiful thing I've ever been a part of in my life. I'm on top of the world and completely consumed with nothing but love and admiration for the people on this campus. Thank you. From the bottom of my heart. Thank you.

Attendees were treated to remarks, a prayer, and blessing, as well as a performance by the Brazen-Faced Varlets theatrical group and a student-organized march around campus. The evening concluded with a candle light vigil, coordinated by NU’s Office of Campus Ministry.

“The Catholic and Vincentian mission of Niagara University calls on us to be the light for those who need our help, and this is another way we are able to do that,” said the Rev. James J. Maher, C.M., president of Niagara University. “We are committed to fostering an educational environment that focuses on the dignity of all people in our community. I’m very grateful to the students, faculty, staff, and administrators who have invested themselves in this cause to affect change.” 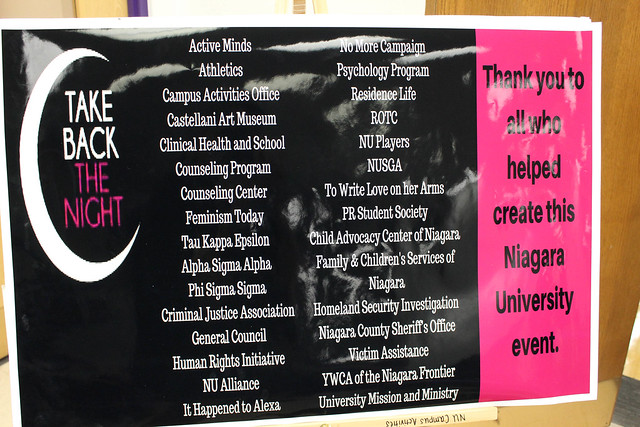 Last April, Niagara University held its first-ever Walk a Mile in Her Shoes event, which saw 125 students stroll around campus carrying a banner and wearing ribbons in support of sexual assault awareness.

The YWCA of the Niagara Frontier is the certified provider of confidential crisis counseling for victims of domestic violence and sexual assault in Niagara County. Among the organization’s numerous crisis service programs is a 24-hour crisis hotline staffed by trained professionals who provide an immediate response to assault victims.

Take Back the Night is a nonprofit charity with the mission of ending sexual violence in all forms, including sexual assault, sexual abuse, dating violence, and domestic violence. TBTN empowers survivors in the healing process, and has hosted events throughout the world for over 50 years.

“Take Back the Night events help all survivors reclaim their voice and empower those who have been victimized,” said Dr. Jennifer E. Beebe, assistant professor of counseling, who is organizing the event at NU with Dr. Dana L. Radatz, assistant professor of criminology and criminal justice. “Through events like this, as well as other outreach related to the awareness of domestic violence, we have the opportunity to work in partnership with community agencies to bring these issues to the forefront.”