The Niagara University Purple Eagle Battalion participated in their annual Combined Field Training Exercise from April 10-14, 2019, at Fort Drum, N.Y. The PEB led the planning, coordination, and execution of this massive training event that included five schools and more than 300 cadets. The Army ROTC programs from Niagara University, SUNY Brockport, St. Bonaventure University, Canisius College, and the Rochester Institute of Technology formed Task Force Eagle for the CFTX. The seniors from each school worked together, beginning in November 2018, to execute a high-quality training event serving as the final preparation of our junior cadets for Advanced Camp during the summer of 2019.

An advance party consisting of senior cadets and cadre moved by vehicle and helicopter to Fort Drum on April 10 to set the conditions for the training event. This included acquiring ammunition, land, training aides, and other training equipment. Junior cadets arrived late in the day and began training April 11 on the M4 rifle qualification range. Cadets spent time initially “zeroing” their weapons to ensure accuracy, prior to firing 40 rounds at targets ranging from 50 to 300 meters for qualification. Cadets then moved to the call-for-fire simulator, where they were taught and practiced how to call for artillery support upon notional enemy locations.

While the juniors conducted their initial training, the freshmen and sophomore cadets arrived and established patrol bases near the obstacle course. The underclassmen intermingled with cadets from other schools, established standard operating procedures, and reviewed land navigation concepts. The juniors moved from their call-for-fire training to the night land navigation course, where they had to plot three points using a map and protractor. They then maneuvered through the woods in darkness, using map and compass to find these points, and negotiating challenging conditions that included snow, swamp, and marsh. 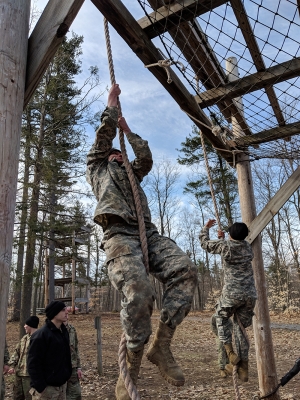 April 12 began with the underclassmen running the obstacle course in squads of eight cadets. Each cadet had to at least attempt every obstacle and work together as a team to successfully negotiate each, if possible. The juniors began the day with more land navigation, this time in daylight conditions, but with more points to find and a longer time allotted. By the time they completed their course late in the morning, the underclassmen arrived and they, too, conducted day land navigation. The juniors conducted a five-mile movement by foot to their final phase of the CFTX: Advanced Tactics. Junior cadets from all five schools were mixed together into three platoons and began training together on critical aspects of platoon operations. Meanwhile, as the underclassmen completed land navigation, they, too, moved to a separate location, where they were intermixed into squads for their final phase of the CFTX: Basic Tactics.

April 13 was focused solely on tactics, as the juniors began an intense 24-hour mission cycle beginning at 0300 and finishing approximately the same time the following day. Their missions and the stressed conditions of little sleep and physical strain were deliberately established to accurately portray conditions they will face during Advanced Camp this summer at Fort Knox, Ky. The underclassmen, similarly, spent a full, albeit not nearly as full as the Advanced Tactics, day focused on squad-level tactical missions. The intent was to push the underclassmen to step into leadership positions they were not accustomed to filling, under stressed conditions with people with whom they had not previously worked. Final evaluations showed that Niagara cadets performed exceptionally well compared with their peers.

Cadets woke up early on April 14 and moved nearly nine miles on foot to the Operational Readiness Training Center, where weapons were cleaned and equipment was accounted for prior to movement back to campus. It was an exhausting four days of training, for cadets and cadre, but all agreed with respect to the quality and value of the training to the readiness and proficiency of our cadets.