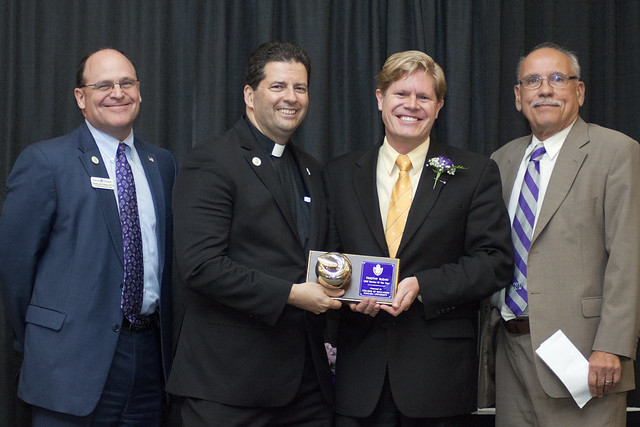 Niagara University’s College of Education recognized the contributions of educational leaders from the Western New York and Southern Ontario communities during its annual professional recognition ceremony on Thursday, Oct. 8.

National Grid (Special Recognition Award) was honored for its commitment to advancing STEM education in Western New York. The electricity and gas company, over the past three years, has partnered with NU’s College of Education and the Niagara Falls City School District to train 45 local teachers in the STEM fields. Through summer camps offered at the university, the grant program from National Grid has also exposed 305 children in grades 3-9 to inquiry-based learning and careers related to energy and STEM.

Chancellor Emeritus Robert M. Bennett (Special Recognition Award) has dedicated his life to improving outcomes for children and his community. During his 20-year tenure with the New York State Board of Regents, which concluded with his retirement in February, Bennett was invested in several critical educational areas, including children living in poverty, early childhood education, the student achievement gap, college and career readiness, and accountability. Bennett previously served as president of the United Way of Buffalo, establishing wraparound services and family support services that helped thousands of families and children.

Elizabeth Corieri (Educational Leader of the Year) has been principal of the Tuscarora Indian School in the Niagara-Wheatfield Central School District since 1997. She began her teaching career at the Military Road School in Niagara-Wheatfield in 1987. She transferred to the Tuscarora Indian School in 1993 and taught first and fifth grade before becoming principal. She holds a bachelor’s degree from Buffalo State College and two master’s degrees from Niagara University.

Michelle Longlade (Educational Leader of the Year) recently retired from her position as director of standards of practice and accreditation at the Ontario College of Teachers. She has more than 30 years of educational leadership experience, including tenures as a consultant, vice principal and principal with the Halton Catholic District School Board. She previously served as an elementary and secondary teacher in Manitoba and Ontario. Longlade earned her master’s degree in administration and supervision from Niagara University.

Jeffrey Rogers (Counselor of the Year) is a school counselor with the Barker Central School District, a position he has served in since 1995. Possessing nearly three decades worth of experience in working with elementary, middle, and high school students, Rogers has been a lead counselor and department chair, president of the Niagara-Orleans Counselor’s Association, and coached tennis, volleyball and golf. He is a Nationally Board Certified Counselor (NBCC), and past recipient of the Orleans/Niagara BOCES Counselor of the Year Award.

Dr. William Helmeczi (Counselor of the Year) is the director of mental health for Pathstone Mental Health Services, an agency for children and youth mental health in Welland, Ontario. In this role, Helmeczi provides leadership to Pathstone’s Education and Training Institute and its Research Institute. He is also a part-time instructor in the child and youth studies department at Brock University. Helmeczi earned master’s degrees in education and school psychology from Niagara, and completed a doctoral degree in public health policy.

Dr. Linda Silvestri (Teacher of the Year) has been employed as an ESL teacher at GJ Mann Elementary School in the Niagara Falls City School District for the past 18 years, and has also served as department chair for many years. Prior to coming to Niagara Falls, she was the assistant director of the English as a Second Language program at the University of Buffalo for 15 years, where she also taught courses in TESOL and ESL, as well as Spanish and Italian. Dr. Silvestri has served as an adjunct professor in the TESOL programs at both the UB and Niagara University.

Timothy Rudan (Teacher of the Year) is chair of the history and social sciences department at Forest Hill Collegiate Institute, part of the Toronto District School Board. After earning his master’s degree from NU, he taught for nine years in the history and French departments at Weston Collegiate Institute in Ontario. During that time, Rudan was recognized by Toronto Police Services and the Canadian Safe Schools Network as Outstanding Staff Advisor and received the student-nominated Greatest High School Teacher Award from Humber College.

Marie A. Cannon (Community Advocate of the Year) is first deputy commissioner of the Erie County Department of Social Services. In this role, she oversees the Family Independence Portfolio, which includes Temporary Assistance, Medicaid, SNAP (food stamps), Employment, HEAP, Domestic Violence, and Day Care. Cannon previously served as chief executive officer of the Child Care Resource Network of Erie County and as executive director of Holy Cross Head Start. She has served as a consultant for the United States Department of Health and Human Services and as a Management Fellow of the Anderson School of Business at UCLA.

Anne Readhead (Community Advocate of the Year) has worked at Community Living Port Colborne-Wainfleet for the past 25 years. In her current position as residential manager, she is a strong voice for service recipients’ rights. She was first introduced to the field of advocacy when she started volunteering with the Brantford Andrew Donaldson Developmental Centre in the late 1980s. Readhead owns a psychology degree from McMaster’s University and a master’s degree in applied disability studies from Brock University.