Weber and Barnard’s presentation of their “Connect and Protect Niagara” app was one of approximately 112 projects showcased during Niagara University’s annual Undergraduate Research Conference on April 27. The event, sponsored by NU’s Honors program, highlights much of the scholarly work that takes place behind the scenes at Niagara, where faculty-guided undergraduate student research occurs at nearly twice the rate of that at other national institutions, according to National Survey for Student Engagement data.

Drs. Yonghong Tong and Suzanne Wagner, faculty members in NU’s department of computer and information sciences, advised Weber and Barnard in creating the app. Its intent is to serve as a hub of information in the Niagara region, thereby increasing residents’ awareness of local agencies, services and programs that can improve their quality of life.

“Connect and Protect Niagara” was awarded a $2,500 grant from the city of Niagara Falls last fall. During Dr. Tong’s pitch to the city council in November, he referenced a 2013 study conducted by The John R. Oishei Foundation’s Mobile Safety Net Team that stated “residents express a lack of awareness of the programs and services in the community that can help them.”

“This is a perfect model of undergraduate research since it allows our students to use their learned knowledge and skills to support local government and serve the community,” said Dr. Tong. “We hope this innovative approach will enhance the effectiveness and efficiency of utilizing emerging technologies in our community. This project is a good start for a future project of building a ‘Smart City’ model for Niagara Falls.” 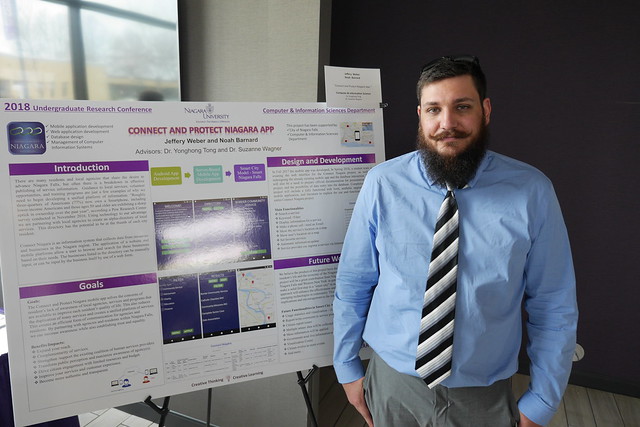 Meanwhile, NU senior and Niagara Falls native Nico Santangelo wrote his Honors thesis on public memory of urban renewal in the Cataract City’s downtown core. The communication studies major sifted through mountains of archived news from the period and combined it with interviews of residents to reconstruct the climate of the era.

“People in Niagara Falls tend to generalize what happened during urban renewal,” said Santangelo, whose passion for the city has led some to predict a future mayoral campaign for the Niagara Catholic graduate. “Through this research, I’m hoping to show residents the complexity of what really went into it.”

Some students, like senior nursing major Ashleigh Miller, have very personal reasons for their research projects. She took up a study on the “Psychological Screening in Survivors of Pediatric Cancers” two years ago, about two months after her dear friend, Jake Miles, took his own life at age 19 after surviving childhood acute lymphoblastic leukemia.

“No person deserves to survive cancer and then not be able to live with the psychological distress that often lasts for years afterward,” Miller said. “I would like to work on fixing this for the next 15-20 years. Nobody should experience that pain. This is how I grieve.”

Miller, after examining 11 scholarly articles, found that rates of depression, suicidal ideation, and other psychological issues are higher in pediatric cancer survivors than in healthy cohorts. She believes that routine assessment of pediatric cancer survivors’ mental health may impact their long-term quality of life, but research showed an inconsistency in the type of psychological assessment tools being utilized to screen patients. Due to that inconsistency, she created a survey that will be distributed to providers to ascertain the current state of screening Western New York.

Other notable projects that were presented Friday included Christian Domin’s use of fruit-derived extracts as anti-cancer agents, Abbie Hibsch’s study on the psychological benefits of blogging, and Sarah Gehl’s examination of how the deposition order of inks may impact forensic analysis of forgeries.

“Students at Niagara have the rare opportunity to work individually with a professor on their own original research,” said Dr. Michael Barnwell, associate professor of philosophy and director of the Honors program. “In fact, all Honors students work, at minimum, for an entire year with a professor. The result is that they make significant contributions to their fields as undergraduates. Not only is this a great benefit to society in general, but it gives our graduates a significant advantage when applying for jobs or graduate schools.”