Two Niagara University students were among the featured speakers at the 2022 annual conference of the National Association of African American Studies and Affiliates, which was held virtually Feb. 14-19. The conference, now in its 30th year, brings scholars from around the world together to share research and studies associated with persons of color. 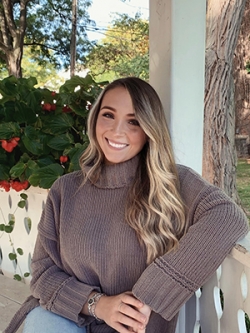 Dayna Starks, a senior with a double major in psychology and gerontology from Rochester, N.Y., presented research on "Health and Income Disparities Among Those in Quadruple Jeopardy: Older Racial, and Sexual Minority Women" while Reva Blitz, a psychology honors senior from Chino Hills, Calif., presented "COVID-19 as it Affects Minorities." Their research was performed with Dr. Susan Mason, professor of psychology and coordinator of Niagara’s gerontology program.

“The annual conference of the NAAAS reaches a global audience,” said Dr. Mason. “As presenters at the conference, Dayna and Reva gained valuable professional experience and represented the best of Niagara University.” 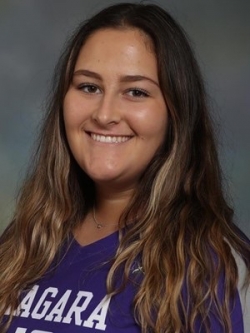 Starks, who is the teaching and research assistant in the university’s gerontology program, focused her research on how the intersectionality of race, gender, age, and sexual orientation can place someone at a disadvantage in regard to healthcare and income solely on the basis of their identity. She notes that she chose the topic because it addressed social justice as it relates to areas that she was interested in, specifically older adults, sexual violence victims, and the LGBTQIA+ community.

Through a literature review, Starks discovered that, while previous studies have explored the disparities among older racial minorities and/or sexual and racial minorities, little research has been done on individuals who meet all four criteria. But that research indicated that ageist, racist, sexist, and homophobic/transphobic views obstruct one’s access to healthcare and employment opportunities, she said.

Her study showed that one-third of LGBTQIA+ older adults live at or below federal poverty level, older adults are perceived as less productive, less trainable, and less promotable than younger workers and, due to traditional gender roles, fewer women participate in the labor force than men.

In terms of health disparities, Starks discovered that women have higher rates of chronic conditions and live longer with disabilities than men; sexual minority women are at greater risk for mental health disorders; racial minorities are more likely to die from cancer than their white counterparts, even though they are both affected by cancer at similar rates; and 20% of adults 50 years or older state that they have experienced discrimination in healthcare settings.

“These findings are a direct result of the discrimination, stigma, and bias they face in everyday life,” Starks said. “It is vital to provide extensive and better quality education for all healthcare professionals, as well as public policy and advocacy initiatives to reduce barriers to healthcare access for low-income individuals.”

Blitz chose her topic because she was curious about the reasons for the disproportionate mortality rates among minorities due to COVID-19. Through her literature review, she discovered that, while pre-existing health conditions made minority groups like African Americans, Latinx, and Asian Americans more vulnerable to contracting and/or dying from the virus, the socioeconomic status of these groups also played a part.

“All of the articles note the biological factors being less of a contributing factor to the disproportionality than the socioeconomic factors,” she said. “These populations are more vulnerable to contracting the virus because they make up approximately 64% of the ‘essential workforce’ and do not have the option to work from home. It is also more common for these communities to reside in crowded urban housing or multigenerational home where the virus is easily transmissible.”