Editor’s note: Adriano Gatto, ’06, Niagara University artist-in-residence, had the unique opportunity to perform alongside one of his first Niagara University theater professors, Jack Hunter, in “Frost/Nixon,” which was on stage at Buffalo’s Irish Classical Theatre Company in March 2019. Gatto played talk show host David Frost to Hunter’s Richard Nixon, and several other NU alums were part of the production, which takes place three years after the Watergate scandal and gives a fictionalized account of the contentious and controversial conversations between the ex-president and Frost.

What interested you in the role of David Frost?
I first learned of the play back in 2007, when one of our alumni, Armand Schultz, ’81, was performing in the Broadway production as Bob Zelnick, with Frank Langella as Richard Nixon and Michael Sheen as David Frost. I bought a copy of the play, read it, and would speak with Army about it on occasion. Upon early research, I became fascinated with the story, and hoped one day it might cross my path again. Frost, himself, is such a fascinating individual. It’s true that no one understood the power of television better than he; he was an extraordinary producer who had tremendous instincts. And he followed them, even if he got burned.

How did you prepare for your performance?
The wonderful opportunity about doing a play based on such a significant historical event involving real people is the amount of source material available for research and study. In addition to watching the actual broadcast repeatedly, we also obtained close to eight hours and different edits of the four programs they created as part of the Nixon interviews. David Frost also wrote two books specifically about this project, both of which I devoured and referenced regularly. I watched and listened to hours upon hours of his speech during the ’70s from various programs of his, in an effort to match his cadence, tone, and particular dialect. While much of the interviews have him seated, I also studied a lot of footage of him from his talk shows walking, moving, to embrace his physicality and posture.

Is playing a real person different from a character, and, if so, how?
Even though David Frost is a real person, the David Frost in the play is still a character. There are, of course, sections of dialog that are verbatim as quoted by David Frost in his books, and some imagined and reconceived for the purpose of the play. If anything, playing a character based on a real person allows the actor to make far more nuanced and specific choices, leading to more dynamic character for the purpose of the story. It’s important to not think about it as an impersonation, but rather an embodiment of the spirit and honest portrayal of the individual.

Jack Hunter, who plays Richard Nixon, was one of your first acting professors at Niagara University. What are your memories/experiences of taking his classes as a student?
He set the bar incredibly high, right out of the gate, treating us not as students, but as aspiring professionals in a studio setting, accountable for our actions (or lack thereof, at times). There are so many fond memories of his class, but he truly left an indelible mark on my artistic soul that inspired me in so many ways. It’s truly an honor and joy to sit opposite him in those interview chairs each performance. I often say to myself, “Man, I have the best seat of his performance in the house.”

What was it like to perform with him now that you have established a career in the industry?

Still incredibly humbling. He’s still taking me to school each night! We have developed a tremendous friendship and respect for each other. 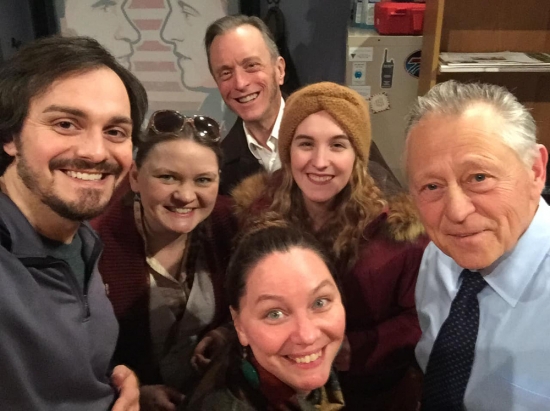 What is it like to be part of a production with other Niagara University alumni (Renee Landrigan, ’13, as Caroline Cushing; David Lundy, as John Birt; Susan Drozd, ’02, hair and makeup designer; and Kari Drozd, costume designer)?
Absolutely wonderful. I’ve worked with each of them many times, and it always feels like you’re coming home when NU alumni connect on a project. We’re all cut from the same cloth, so to speak, in one way or another and share a very special bond that is Niagara University Theatre.

To what do you attribute NU’s significant presence in the Buffalo theater community?
The breadth and depth of training instituted by Brother Augustine Towey, Dr. Sharon Watkinson, and Tim Ward, as well as the countless faculty (including myself now) who are dedicated to maintaining and advancing that tradition of excellence in theater training programs. The amount of practical training our students receive in our BFA programs is insane; I still cannot believe how much they do in such a short amount of time. The goal was and is to give students as much practical experience in a diverse range of disciplines to develop a far greater skill set that, in turn, will allow them to be far more marketable when they graduate.