Rory Wheeler, a junior political science major and pre-law student at Niagara University, is balancing academics with his roles as an emergency medical technician for Seneca EMS, and as a firefighter and EMT for the Cattaraugus Indian Reservation Volunteer Fire Department. While the work has always had an element of danger, the current coronavirus pandemic has forced him, and his colleagues, to increase their efforts to protect themselves and their community.

“I have been an EMT since I was 18 years old and have found no greater enjoyment in serving my community,” he said. “The seriousness of this pandemic affects everyone in our community and thus, preventative efforts are vastly important to protect the vulnerable. This includes our elders, whom are the lifeblood in passing down our culture and traditions to future generations.” 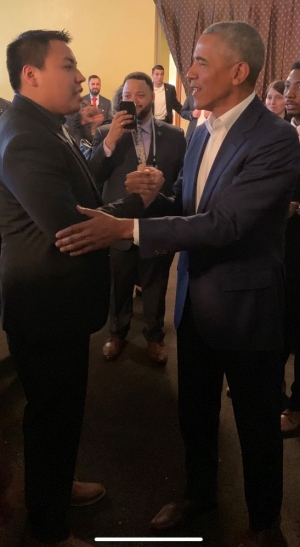 Wheeler, who resides on the Seneca Nation Cattaraugus Territory in Irving, N.Y., says that serving his people has been his passion since he was 12 years old, when he first started volunteering with the fire department. Service in the Seneca Nation’s executive, legislative, and judicial governmental branches followed, leading to national service as a White House Tribal Nations Youth Ambassador under former President Barack Obama, during which he represented his community and peers to share his perspectives on critical issues in Indian Country. He is currently the youth commission co-president for the National Congress of American Indians, which provides tribal youth leaders with the tools needed to be successful in their endeavors.

These experiences have inspired him to dedicate his career to helping Indian Country grow and succeed, he said. His aspiration is to become an attorney focusing on American Indian law and policy “to help tribes greater exercise and defend their sovereignty, their treaty rights, and ensure that the United States fulfills its trust responsibilities.”

Both his volunteer service and his response efforts during the current pandemic align with the tradition of the Haudenosaunee (people of the longhouse), who feel a great duty to think of and prepare for the next seven generations.

“All of us play a role in keeping our communities safe and must follow the guidance of our health professionals,” Wheeler said. “As this pandemic calls for an all-hands-on-deck approach, I encourage everyone to look for ways that they can give back to their communities.”