The event, which takes place during the university’s celebration of Vincentian Heritage Week, recognizes the extraordinary contributions of university employees, alumni and community leaders.

William J. Bradberry, ’70, received the St. Vincent de Paul Medal as an outstanding Catholic lay person whose life embodies the ideals and values of St. Vincent. In the 1980s, the Niagara Falls native served as director of equal opportunity for the city of Niagara Falls and, later, for Erie County, before being appointed director of neighborhood revitalization. He then became the deputy regional director for the New York State Division of Housing and Community Renewal. After spending time working in the public sector in Florida, Bradberry returned to Western New York in 2005 to form the Niagara Movement Foundation and was instrumental in creating the “Freedom Crossing” Underground Railroad exhibit at Niagara University’s Castellani Art Museum. His involvement in shaping the city’s future includes leadership tenures with the Niagara Falls Human Rights Commission, the local chapter of the NAACP, and the Niagara Falls Underground Railroad Heritage Area Commission, to name a few.

The Rev. Patrick Flanagan, C.M., ’87, Ph.D., was presented with the St. John-Gabriel Perboyre Award for extraordinary service and contributions to the global society. Celebrating his 25th year as a Vincentian priest, Father Flanagan has focused much of his research on the virtues and vices of technology, as seen through the lens of Catholic social teaching. An accomplished teacher as well, he is a three-time recipient of a Faculty Recognition Award from St. John’s University, where he is an associate professor in theology and religious studies, and religious superior of its Vincentian community. Father Flanagan is a Trustee of Niagara University and sits on the boards of Holy Trinity Diocesan High School and HeartShare Human Services of New York. He also serves on the board of advisors for the St. John’s University Law School Center for Labor and Employment Law, and as a member of his department’s Undergraduate Educational Policy Committee, to name just a few.

Mustafa Gökçek, Ph.D., associate professor of history and director of the master of arts in interdisciplinary studies program at Niagara University, was presented with the Ozanam Medal, which is awarded to individuals who have improved the situation of the poor, and advanced the cause of social justice. Through his classes, which focus on the Middle East, Central Asia and the Soviet Union, and on study-abroad trips to his native Turkey, Dr. Gökçek fosters tolerance and understanding among his students. Dr. Gökçek participated in a BRIDGES meeting between officials from Buffalo, N.Y., and Muslim community representatives. His research interests include contemporary social movements in Muslim societies, advancing knowledge and understanding of the challenges faced in the Muslim world today.

Presented with the St. Louise de Marillac Award for Outstanding Service was Denise Góñez-Santos, who has spent 33 years in education, focusing her career on assisting children who are learning English as a second language. She is currently the executive director of the Regional Bilingual Education – Resource Network West, one of eight centers funded by the New York State Education Department. The center, under the leadership of Góñez-Santos, provides technical assistance, professional development and resources to ensure academic success for English language learners in the 98 schools that comprise its service region. Góñez-Santos has served as the Buffalo region chairperson for the New York State Teachers of English to Speakers of Other Languages for the past seven years. She has been recognized often for her advocacy of nonnative children and families, the most recent of which was the New York State Association for Bilingual Education’s Gladys Correa Memorial Award.

The Rev. Patrick Griffin, C.M., ’75, Ph.D., received an honorary Doctor of Humane Letters for his willingness to serve whenever – and wherever – the Lord has called him. After completing a doctorate in biblical studies at the Catholic University of America, Father Griffin taught at various Vincentian seminaries and universities, including Niagara, from 1984-1993. He then lived in Rome for seven years to serve as international treasurer of the Congregation of the Mission. He served on the St. John’s University Board of Trustees from 1996-2008, before becoming the university’s executive vice president for mission and branch campuses. The Superior General of the Congregation of the Mission’s Eastern Province appointed Father Griffin director general for the Daughters of Charity from 2010-2014. He presently lives and serves at St. John’s in the role of executive director of the institution’s Vincentian Center for Church and Society. Father Griffin was a Niagara University Trustee from 2008-2017.

Kurt Von Voetsch was presented with the Vincentian Mission Award, which is given to members of the university community who seek to emulate the altruistic spirit of St. Vincent, the universal patron of charity. For the past 25 years, Von Voetsch has served as a gallery manager and part-time instructor of studio arts at Niagara University. He is an extraordinarily accomplished artist in his own right, frequently exhibiting at major regional galleries, such as Hallwalls, the Burchfield Penney, Big Orbit and the Castellani Art Museum, among many others. In recent years, Von Voetsch has used his creativity as “a method of purging fear” amidst his ongoing struggle with cancer, while still dedicating much of his time to supporting others battling the disease. 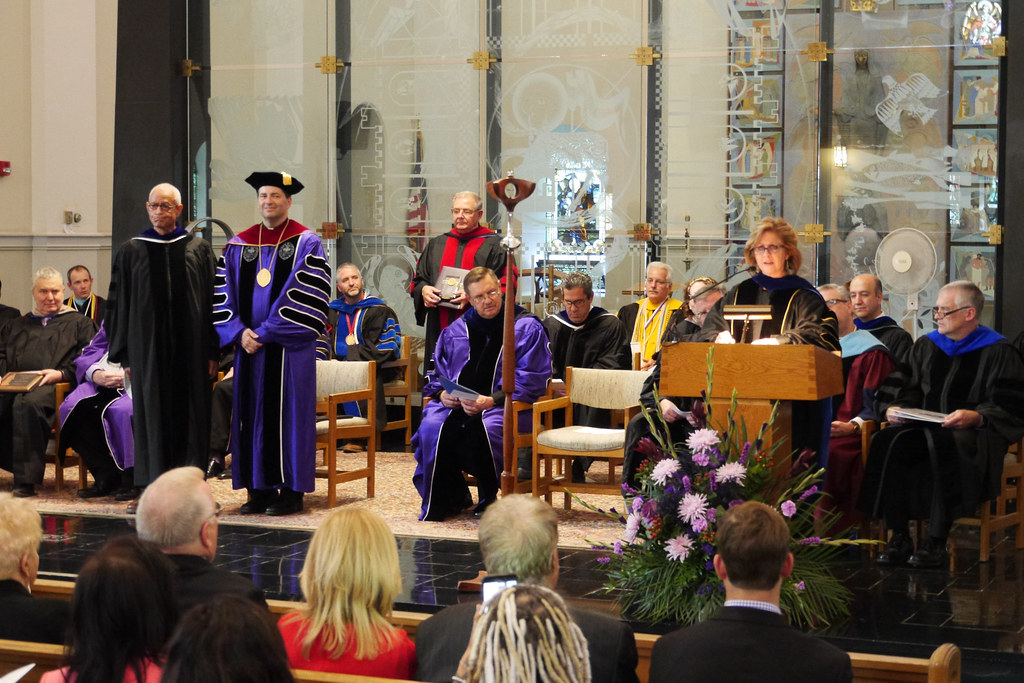