The event, which takes place during the university’s celebration of Vincentian Heritage Week, recognizes the extraordinary contributions of university employees, alumni and community leaders. 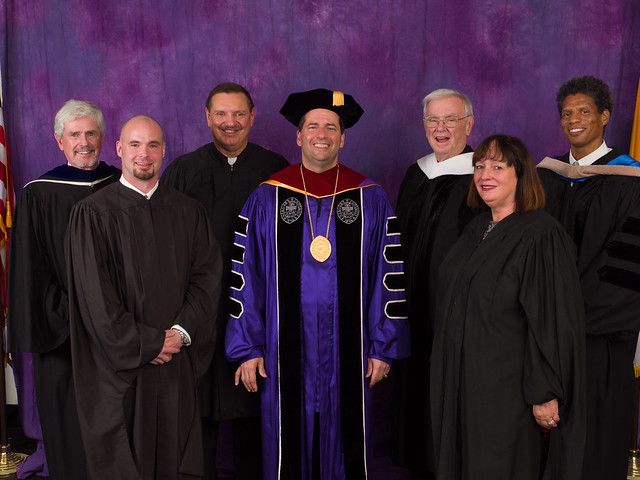 David N. Campbell, ’63, received the St. Vincent de Paul Medal as an outstanding Catholic lay person whose life embodies the ideals and values of St. Vincent. The former president of BBN Technologies and CEO of Computer Task Group and Xpedior is the founder of All Hands Volunteers, a disaster response organization that has helped rehabilitate devastated areas in Thailand and along the U.S. Gulf Coast, among others. All Hands Volunteers has executed over 40 projects – utilizing more than 30,000 volunteers – in the United States and abroad. Campbell has served on the boards of Niagara University, SUNY Buffalo, Tektronix, M&T Bank, MRO Software and Gibraltar Industries, and chaired the boards of the Roswell Park Cancer Institute Council, the Buffalo United Way campaign, the Erie County IDA and the Buffalo Chamber of Commerce, to name a few. Campbell is a Trustee Emeritus at Niagara University. He is the recipient of an honorary doctorate from Niagara University, Citizen of the Year from The Buffalo News, the 2013 Richard Cornuelle Award and the Encore.org 2014 Symetra Purpose Prize.

Presented with the St. Louise de Marillac Award for Outstanding Service was Kathleen A. Granchelli, chief executive officer of the YWCA of the Niagara Frontier. During Granchelli’s 21-year tenure with the YWCA, the organization has secured more than $10 million in grants to develop programs and services in Niagara County. She was the driving force behind the YWCA’s $6 million adaptive re-use of Carolyn’s House, a historic Niagara Falls facility that provides supportive transitional and permanent housing for homeless women and children. The YWCA, under Granchelli’s leadership, has also implemented three full-service catering “businesses” that offer hands-on training to culinary training program students. Earlier this year, Granchelli shepherded the merger with the YWCA’s Tonawanda affiliate in an effort to create a more streamlined and strategic organization. She received her B.S. in history at SUNY Brockport and completed Harvard’s Kennedy School program for State and Local Government. Granchelli is a Leadership Niagara graduate, a member of the Niagara County Workforce Investment Board, a board member of the Homeless Alliance of Western New York, former president of the YWCAs of New York State and a New York State Woman of Distinction.

The Rev. Stephen M. Grozio, C.M., ’75, was granted the Perboyre Medal for extraordinary service and contribution to the global society. Father Grozio, who early on taught high school religion and mathematics in Warminster, Pa., has dedicated much of his priestly work to serving those who immigrated to America in search of a better life. After learning Spanish, “Padre Esteban,” as he was called, served the Spanish-speaking farmworkers and residents of the Diocese of Kalamazoo, Mich. Father Grozio, in 1989, was sent to St. John the Baptist Parish, a financially struggling parish in Brooklyn, where he spent six years before carrying out a five-year appointment as assistant provincial of the Eastern Province of the Congregation of the Mission. In 2000, Father Grozio was named director of the Hispanic Evangelization Team, which served the Spanish-speaking communities of the Archdiocese of Philadelphia. He was also named provincial treasurer of the Eastern Province in 2002. Since 2007, Father Grozio has been the director of the Hispanic Apostolate of the South Fork of Long Island, which offers Catholic Mass, sacraments and other services in Spanish in seven parishes.

Christopher Lee, Ph.D., was presented with Niagara’s Ozanam Medal, which is awarded to individuals who have improved the situation of the poor, and advanced the cause of social justice. An associate professor of comparative politics, Dr. Lee is admired by his students and colleagues for possessing a strong sense of social justice and commitment to diversity.  Dr. Lee has led several trips with Niagara’s Model UN student participants, once traveling with students to Amsterdam. For many years, he was the co-moderator of Diversity Advocates at Niagara. More recently, he has worked to establish a field-based intensive course in Cuba, which is set to begin next May. Among Dr. Lee’s research interests are Latin American politics, African politics, political conflict and violence, human rights and democratization. His recent publications include articles and chapters that focus on human rights, ethnic conflict, democracy and global affairs. Dr. Lee earned his B.A. from California State University, Northridge, and both his M.A. and Ph.D. from the University of California, Riverside. He was an instructor at the University of Minnesota for seven years before joining the Niagara community in August of 2006.

The Rev. W. Barry Moriarty, C.M., received an honorary Doctor of Humane Letters for living an extraordinary life, consumed with St. Vincent de Paul’s excitement and surety about the importance of community service. Ordained in 1967, Father Moriarty holds a bachelor’s degree from St. Mary’s Seminary, master’s degrees from DePaul University and Regis College, and a doctorate from St. John’s University. He is a member of the Congregation of the Mission’s Western Province, with prominent priestly assignments that include tenures as director of Vincentian novices in New Orleans, Germantown and Nairobi. In the mid-1990s, Father Moriarty was summoned to Marsabit, Kenya, originally to teach in the diocesan seminary. Father Moriarty was instrumental in the January 2000 opening of the DePaul Centre in Nairobi, which now serves as the center for Vincentian formation in eastern Africa. Father Moriarty later became superior of the facility and helped establish a presence there for the Daughters of Charity. There are presently 25 ordained Vincentian priests and 15 Daughters of Charity who credit their formation to the DePaul Centre. Father Moriarty returned to Chicago in 2011 to live in residence at DePaul University.

Derek Puff was presented with the Vincentian Mission Award, which is given to members of the university community who seek to emulate the altruistic spirit of St. Vincent, the universal patron of charity. A Niagara University employee since 2008, Puff serves as assistant director of recreation and intramurals and director of the Kiernan Center’s summer youth programs. Puff also recently began teaching a course on contemporary recreation and leisure within NU’s College of Hospitality and Tourism Management. In January 2013 and then again two years later, Puff chaperoned groups of NU students to perform community service in the most destitute areas of Camden, N.J., as part of Niagara’s Brothers and Sisters in Christ program. He also regularly volunteers at the St. George’s Church soup kitchen in downtown Niagara Falls, and serves on the athletics board for Springville High School. As the Kiernan Center’s summer camp director, Puff has partnered with local youth organizations to offer scholarships to financially disadvantaged children. Puff earned bachelor’s and master’s degrees from SUNY Brockport.