Niagara University was co-founded in 1856 by the Rev. John Timon, C.M., and the Rev. John Lynch, C.M. At that time, they sought to prepare young men for the priesthood and to be citizens for society.

Just as they had answered the calling to priesthood and life as Vincentians, Fathers Timon and Lynch endeavored to build an educational mission, which, in the true spirit of St. Vincent, invited others from all walks of life to share in their calling.

Niagara University was originally established as the College and Seminary of Our Lady of Angels, opening its doors with six students and two faculty members. Today, more than 4,000 students are studying in 80-plus majors at NU, comforted by the abiding presence of the Vincentian community or, as St. Vincent described, the “little company.”

The life of Father Timon, who later became the first bishop of Buffalo, was the topic of a conference commemorating his legacy on the 150th anniversary of his death. Held Sept. 22 at Christ the King Seminary in East Aurora, the event included a welcome and prayer by current Bishop Richard J. Malone and presentations by representatives from several institutions founded by Bishop Timon. 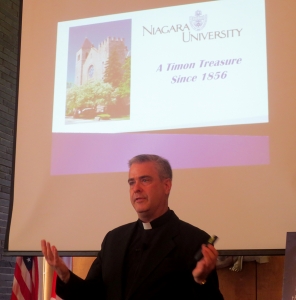 The Rev. Kevin G. Creagh, C.M., vice president for mission and ministry at Niagara University, was one of them. He discussed Bishop Timon’s impact on Catholic higher education.

Bishop Timon, who served in Buffalo from 1847-1867, was not only the founder of the diocese, but the foundation as well. He built the first hospital in the city, as well as Catholic colleges and high schools where he saw a need. All but one institution, Holy Angels Academy, still stand.

“This thing about Timon was he was very strategic. He established institutions that the area needed,” said Dr. Dennis Castillo, a Christ the King professor. “He would do no duplication of services. The only case where there was duplication was the orphanage, where he was concerned that Catholic boys were being placed into Protestant farms, as well as Catholic clergy were not allowed to visit.”

He founded very few parochial schools because there was nothing anti-Catholic in the public school curriculum. He focused on what the diocese didn’t have, such as high schools and colleges.